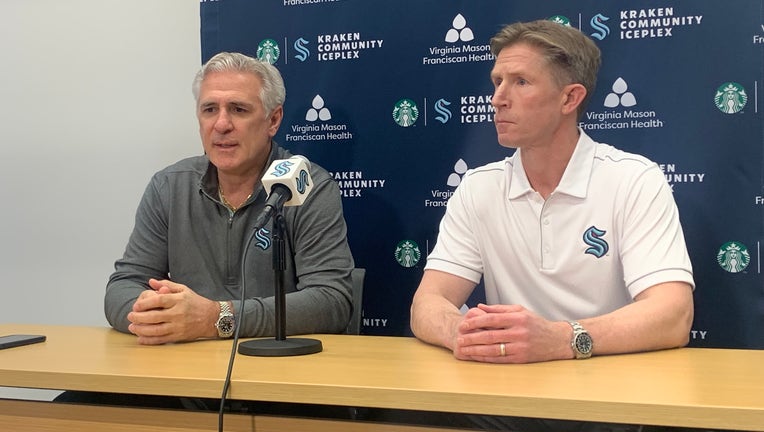 "We did make a decision today to not renew the contract of Andrew Allen, our goalie coach. So he will not be coming back as our goalie coach at this point," general manager Ron Francis said Tuesday.

"I think just basically how the season had gone. You know, I thought we struggled early and we just couldn't kind of get out of it. So we figured we'd look in a different direction for next season."

Goaltending struggles, especially early in the season, are among the biggest reasons why the Kraken's inaugural season veered off-course so quickly.

Despite allowing the fourth-fewest shots in the league, the Kraken allowed the ninth most goals. Out of 53 goaltenders across the NHL with at least 25 games played, Grubauer ranked dead last in save percentage at 88.9 percent. Driedger was 41st at 89.9 percent.

"On a day-to-day basis, there's an awful lot that goes into it," head coach Dave Hakstol said. "We had Andrew as a great part of the staff in terms of, you know, who he is as a person, his work ethic. As we look toward the future, that's one thing in terms of, you know, being a good fit with our staff, but most importantly, being able to communicate and affect the two guys that are in goal for us on a day-to-day basis."

The goaltending did improve in the second half of the season. Francis noted that as of the trade deadline the team was ranked at the bottom of the league in goaltending. But over the final five weeks of the season, the tandem ranked 14th in the league.

But the collective struggles to an area the team believed would be a strength of the club led the franchise to go in a different direction.

"At the end of the day, we felt this was the best decision for the organization at this point," Francis said.

Allen has been a goalie coach for the Japanese Men's Hockey Team, St. Lawrence University, Rockford Icehogs, and Buffalo Sabres before joining the Kraken.

While the Kraken shared the Charlotte Checkers with the Florida Panthers as their American Hockey League affiliate for their first season of play, the team will have its own affiliate beginning play next season.

However, the new facilities under construction in Palm Desert, Calif. are not expected to be ready for the start of the AHL season. Francis said the practice facility will be ready sometime in November with their new arena set to open in early December.

With the AHL season beginning in October, Francis said they are looking into having the Firebirds begin play in Seattle with games likely to be held at Climate Pledge Arena.

"We may start, most likely, out of Seattle, the first month-and-a-half be based out of here, play some games here in Seattle for the people here to see and then eventually move down there into our new building," Francis said.

Francis said they are still talking about their options, but that the hope is for the Firebirds to play at Climate Pledge Arena.

Francis still needs to hire coaching and support staff for the Firebirds and will need to sign more players to fill out the minor league roster this offseason.

– Ryker Evans will have "every chance" to make the roster.

Kraken second round draft pick Ryker Evans has a chance to earn a spot on the team for next season.

"Ryker will have every opportunity to make our team when he comes to camp this September. If he makes it, great. If he doesn't, then he'll start off in Coachella Valley," Francis said.

Evans, 20, was the 35th overall pick of last year's NHL Draft by Seattle. He scored 14 goals with 47 assists in 63 games played this season for the Regina Pats of the Western Hockey League.

Evans was named a second-team All-Star for the WHL's East Division this year. He led all Regina defenseman in goals, assists and points. He was seventh among all WHL defenseman in points.

– Brandon Tanev, Jaden Schwartz expected to be ready for camp.

Forwards Brandon Tanev and Jaden Schwartz are both expected to be full ready for the start of training camp in September.

"They should be both ready to go when camp starts," Francis said.

Tanev was lost for the season in December to a torn ACL when William Lagesson of the Edmonton Oilers fell into the back of his left knee.

Schwartz played in just 37 games this season due to a hand injury and an unrelated upper body injury sustained shortly after returning to action.