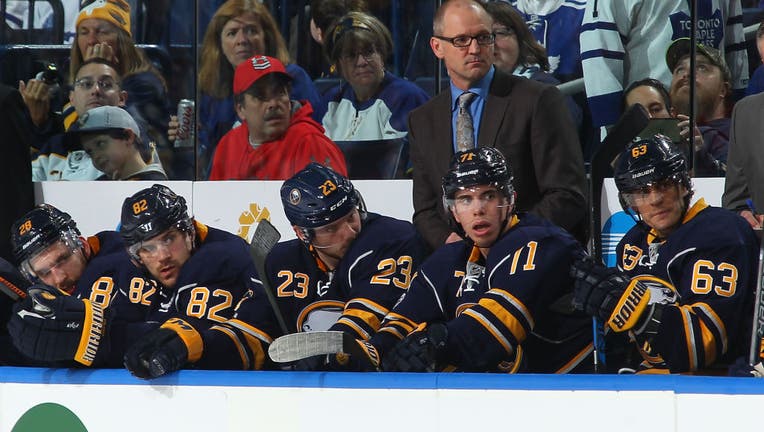 BUFFALO, NY - APRIL 03: Head coach Dan Bylsma of the Buffalo Sabres watches the action against the Toronto Maple Leafs during an NHL game at the KeyBank Center on April 3, 2017 in Buffalo, New York. (Photo by Bill Wippert/NHLI via Getty Images)

Bylsma, 51, won a Stanley Cup with the Pittsburgh Penguins in 2009 as part of a six-year run leading the franchise. He won the Jack Adams Award in 2011 as the league’s most outstanding coach and later spent two seasons as the head coach of the Buffalo Sabres.  Bylsma also was the head coach of the U.S. men's hockey team for the 2014 for the Winter Olympics in Sochi, Russia.

"I think when we look at it from an organization standpoint, it’s such a critical part of the process for us," general manager Ron Francis said. "We draft these young men, and we ask them to go and play in the American Hockey League, and we try and draft and develop them to get to the NHL. So having a guy with that sort of pedigree – he’s coached at all levels, AHL, NHL, World Championships, he’s won a Stanley Cup, he’s been coach of the year in the NHL – we feel very fortunate we have somebody like Dan to lead that charge and help the development of our young players."

Bylsma was the obvious choice to lead the Firebirds into their inaugural season. He spent last season as the Kraken's assistant coach on the staff of the Charlotte Checkers, the AHL team Seattle shared with the Florida Panthers.

"The opportunity feels like it is one from the ground up" Bylsma said. "The Kraken have obviously had an expansion draft and a year under their belt but didn’t have a development system or an American Hockey League team to develop their players and we’re starting one from the ground up here in Coachella. And that’s an exciting thing."

As a player, Bylsma logged 429 NHL games over nine seasons as a winger with the Los Angeles Kings and Anaheim Ducks. He began his coaching career AHL in 2004-05, spending three seasons as an assistant coach for Cincinnati and Wilkes-Barre/Scranton, and one year with the NHL’s New York Islanders as an assistant before taking over the Wilkes-Barre/Scranton Penguins in the AHL.

The Firebirds will begin AHL play this season for Seattle. While the team will eventually play at Acrisure Arena in Palm Desert, the new building won't be ready for the start of the season in October. The Firebirds will actually play their home games in Seattle to begin the season with practices set to run in the Kraken Community Iceplex until they can move into their headquarters and arena after the season begins.