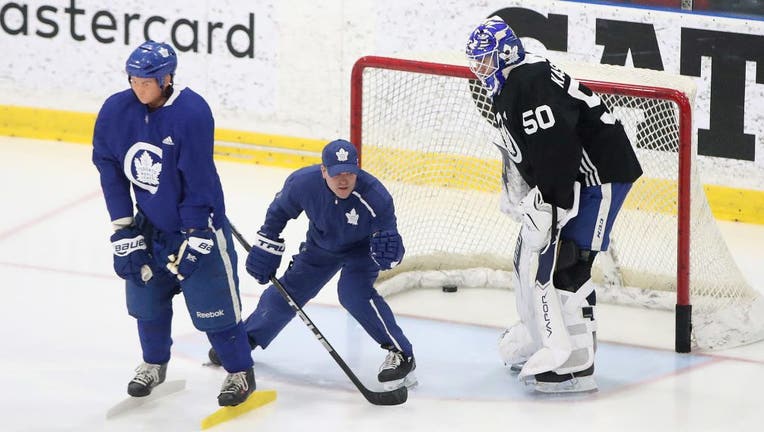 The Seattle Kraken have hired Steve Briere to serve as their new goaltending coach and Jessica Campbell to serve as an assistant coach on Dan Bylsma's staff with the Coachella Valley Firebirds.

Briere coached Frederick Anderson and Jack Campbell during his time in Toronto as both players would be named NHL All-Stars during his tenure.

"I think when we were looking at things, interviewing people, one thing that came into play was he has more experience," Kraken general manager Ron Francis said on Tuesday. "And I think in our situation, based on kind of how things went last year, that was a key component we were looking for. He's got experience in the league. He's had success. And in the discussions with him, liked what he had to say and how he taught."

Briere will be tasked with fixing a goaltending situation that struggled mightily in the franchise's debut season. Despite allowing the fourth-fewest shots in the league, the Kraken allowed the ninth most goals. Out of 53 goaltenders across the NHL with at least 25 games played, Philipp Grubauer ranked dead last in save percentage at 88.9 percent. Chris Driedger was 41st at 89.9 percent.

Driedger is out for at least half of the season due to a torn ACL sustained playing for Team Canada this summer in the IIHF World Championship. Joey Daccord is the lone other goaltender currently under contract for 2022-23.

Campbell played collegiate hockey at Cornell and played for Team Canada in two World Junior Championships. She also played professionally for the Calgary Inferno of the Canadian Women's Hockey League.

"When I was looking for a staff to lead the team, to lead the players, I wanted to find a person with passion, with a knowledge for the game, with experience in the game, and one that could relay it to the players and get in on a plan with them and develop them as a player and that's where Jess' skill and talent came into play. And I'm just super excited to have Jess on the staff with us in Coachella," Bylsma said.

Campbell has worked as a private skating and skills instructor. During the COVID-19 NHL shutdown, she worked with NHL players such as Luke Schenn, Tyson Jost, Shea Weber and Mat Barzal in running impromptu practices for players stationed in Kelowna, British Columbia.

Bylsma said Campbell's name kept coming up in his conversations with other coaches and people around hockey as someone to keep an eye out for. He then reached out to Campbell through a generic email address for her skating school as he tried to get in contact with her about the idea.

"My initial reaction, you know, I actually thought 'is this spam?'" Campbell said with a laugh.

"It was special because I was obviously in a position where I was looking for that next step and the timing of everything. I actually said no to a different opportunity that didn't feel like the right fit and so it was only shortly hours after I said no that Dan reached out and, you know, kind of that gut feeling of maybe this could be the start of something really good. And here we are. So I'm excited about it."

Campbell began coaching last year with the Windy City Storm Girl's Hockey Program in Chicago, then with the Nurnberg Ice Tigers in the Deutsche Eishockey Liga (DEL). She was also an assistant coach for Germany at the 2022 IIHF Men’s World Championship.

"I think she combines a lot of interesting things," Francis said. "She's got a strong background as a skating coach and some skill stuff. So that's intriguing to bring in. She's had experience coaching. Was interesting seeing her on the bench in the world championships with Germany standing next to a gentleman that I worked with in Tom Rowe and so a lot of good experience in the coaching aspect there as well. So we think she's got a bright future in the game and we're excited to bring her into our fold and have her work with our prospects as we try and build up the ground from the ground up."