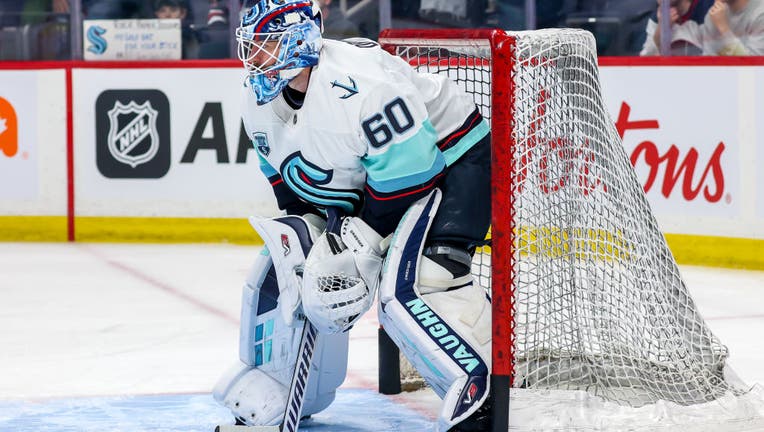 WINNIPEG, MB - MAY 01: Goaltender Chris Driedger #60 of the Seattle Kraken takes part in the pre-game warm up prior to NHL action against the Winnipeg Jets at Canada Life Centre on May 01, 2022 in Winnipeg, Manitoba, Canada. (Photo by Jonathan Kozub/

The Seattle Kraken will be without goaltender Chris Driedger for 7-9 months after he sustained a torn ACL while playing for Team Canada in the IIHF World Championships in Finland.

Driedger was in net for Canada in the gold medal match against tournament host Finland. With Canada holding a 1-0 lead just over four minutes into the third period, Driedger tried to slide across to stop a shot from Mikael Granlund. Driedger slid into the right post and was injured on the play as Finland tied the game at 1-1.

Driedger had successful surgery on Monday, the Kraken announced.

Driedger had an uneven first season with Seattle after signing a three-year, $10.5 million deal with the expansion team last offseason. Driedger played in 27 games and had a 2.96 goals-against average and an 89.9 save percentage. Those marks were the worst of Driedger's career.

Despite allowing the fourth-fewest shots in the league, the Kraken allowed the ninth most goals in the league last season. Out of 53 goaltenders across the NHL with at least 25 games played, Philip Grubauer ranked dead last in save percentage at 88.9 percent. Driedger was 41st at 89.9 percent.

Grubauer and Joey Daccord are the only other goaltenders under contract for Seattle for next season. Daccord has been on a two-way contract for the Kraken that allowed them to bring him up from the AHL Charlotte Checkers without needing to clear waivers. That won't be the case in 2022 as he would have to clear waivers to be sent down to the minors.

Daccord set the Checkers' single-season record for best save percentage at 92.5 percent and ranked second in goals against average at 2.28. Daccord would be the likeliest option to serve as Seattle's No. 2 goaltender under Driedger can return from the knee injury. However, the Kraken could look to add to the group in free agency as well.

Antoine Bibeau was the second goaltender from Seattle with the Checkers last season but is an unrestricted free agent.