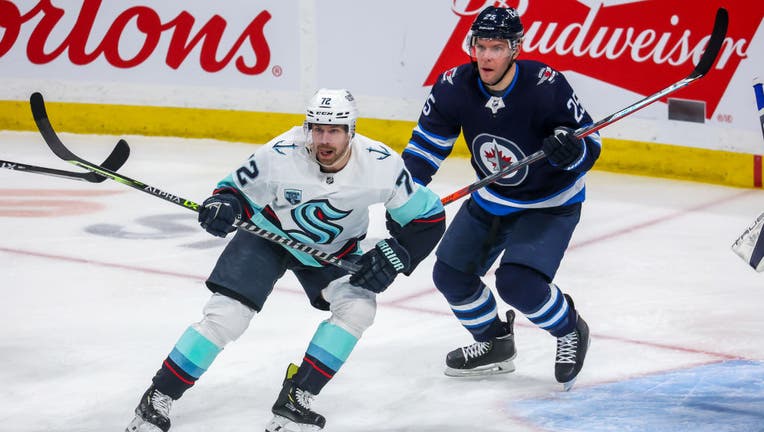 WINNIPEG, MB - FEBRUARY 17: Joonas Donskoi #72 of the Seattle Kraken and Paul Stastny #25 of the Winnipeg Jets keep an eye on the play during third period action at Canada Life Centre on February 17, 2022 in Winnipeg, Manitoba, Canada. (Photo by Jona

The Seattle Kraken's game scheduled for Wednesday against the Winnipeg Jets has been postponed due to severe weather expected to hit Manitoba.

The postponed game will now be the final game of the season for both teams and the final regular season game in the NHL at 11 a.m. PT on Sunday, May 1. The rest of the NHL will have wrapped up their regular season campaigns on Friday, April 29.

The Winnipeg area is expecting a severe blizzard to hit the province beginning Tuesday night. Heavy winds are also expected with snow accumulation of over a foot.

The NHL said in a statement that the decision to postpone the game was not only due to the effects of the weather on the ability to stage Wednesday's game, but also the potential disruption to future games should the teams get stuck in Winnipeg and become unable to travel. The Jets are set to face the Florida Panthers in Miami on Friday. The Kraken are schedule to play the New Jersey Devils on Saturday in Seattle.

Per Darren Bernhardt of the CBC, the storm expected to hit Winnipeg is thought to be the worst in decades. A blizzard in 1997 hit the city with well over a foot of snow. When the snow melted off, it left the city severely flooded.

The Kraken are in Calgary tonight to face the Flames at 6 p.m. PT. The game will feature the debut of top draft pick Matty Beniers, who signed his three-year entry level contract with the Kraken on Sunday.

The Seattle Kraken will get to see top draft pick Matty Beniers play for the team over the final 10 games of the season.