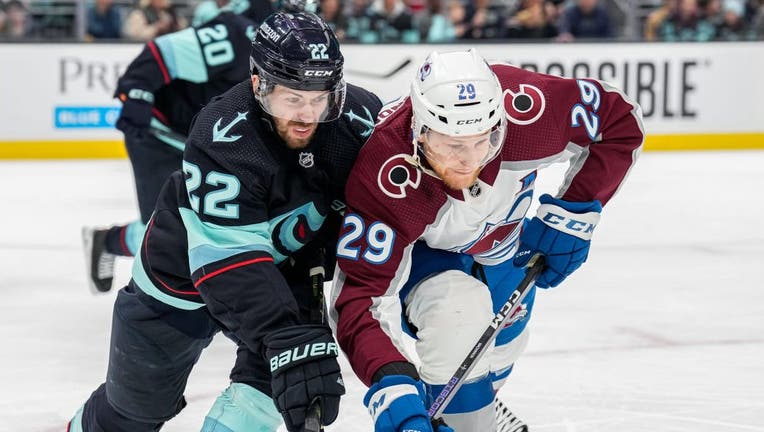 SEATTLE, WASHINGTON - JANUARY 21:Oliver Bjorkstrand #22 of the Seattle Kraken and Nathan MacKinnon #29 of the Colorado Avalanche battle for the puck during the second period of a game at Climate Pledge Arena on January 21, 2023 in Seattle, Washington

SEATTLE - Nathan MacKinnon scored the only goal of the shootout and the Colorado Avalanche beat the Seattle Kraken 2-1 Saturday night for their season-high fifth straight win.

Alex Newhook scored in regulation for the Avalanche, and Pavel Francouz stopped 26 shots.

"You know, we’ve been playing pretty well here lately. I liked the way our team played again tonight," Colorado coach Jared Bednar said. "It was an evenly matched game obviously. Fitting that it goes to a shootout."

Ryan Donato scored for the Kraken, and Philipp Grubauer also had 26 saves.

Donato, Jordan Eberle and Daniel Sprong all failed to score in the tiebreaker for Seattle, which fell to 0-2 in shootouts. Evan Rodrigues missed with Colorado’s first chance, but MacKinnon put his shot past Grubauer on the Avalanche’s second attempt.

Colorado now has a league-best nine wins in games that go beyond regulation this season, including four shootout victories.

"There was hard checking both ways, both teams were defending well, not a lot of chances out there," Colorado’s Mikko Rantanen said. "We came through even though it was the second game of a back to back, so this was a really big one."

The single point for the shootout loss combined with Vegas’ win against Washington dropped the Kraken to second place in the Pacific Division. Seattle had entered the game in a first-place tie with the Golden Knights.

"Both teams were scratching and clawing and battling," Seattle coach Dave Hakstol said. "Obviously it’s disappointing when you don’t win in the shootout and get the extra point, but in terms of our effort, our work level was good throughout the hockey game."

After a scoreless first period, the Avalanche got on the board first at 8:18 of the second as Newhook fired a rebound past Grubauer for his 10th goal.

The Kraken answered to tie it 1:08 later. Donato intercepted the puck as Colorado tried to clear it out of the zone, and quickly fired a shot in from the top of the right circle for his third goal in two games and 11th of the season.

The Avalanche were inches from taking the lead with about seven minutes left in the second period as a shot by Ben Meyers dribbled past Grubauer and through the crease. Seattle defenseman Adam Larsson was able to poke it away just before the puck crossed the line to keep the score tied.

"I just happened to be in the right place at the right time," Larsson said. "We were playing last year’s champs, so I think everyone was excited for this one. Obviously we’re not happy with the end result, but there were good efforts out there."

The Kraken were without Andre Burakovsky, who leads the team in points and scored an overtime winner against New Jersey in Seattle’s previous game. Burakovsky skated in warmups but was a late scratch. ... Colorado D Cale Makar was out for the third straight game despite skating in pregame warmups.

Bednar got his 265th victory, tying the franchise record for wins. Bednar matched the win total of Michel Bergeron, who coached the Quebec Nordiques for eight years in the 1980s, before the franchise moved to Colorado.

"I wasn’t aware of that until this morning," Bednar said. "It’s a privilege to coach and work in the NHL, and it’s certainly a privilege to be able to work for an organization like the Avalanche that gave me my first crack at a head coaching position in the league, and I don’t take it for granted. I appreciate every day."