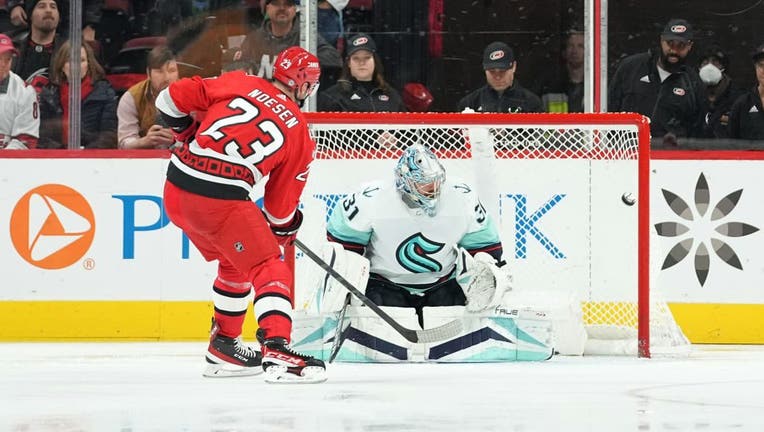 RALEIGH, NORTH CAROLINA - DECEMBER 15: Stefan Noesen #23 of the Carolina Hurricanes scores a goal on a penalty shot attempt against Philipp Grubauer #31 of the Seattle Kraken at PNC Arena on December 15, 2022 in Raleigh, North Carolina. (Photo by Jos

RALEIGH, N.C. - Carolina goalie Pyotr Kochetkov had his scoreless streak end and the Hurricanes held on after building an early lead to beat the Seattle Kraken 3-2 on Thursday night.

Andrei Svechnikov and Derek Stepan scored in the first period and Stefan Noesen added a second-period goal on his first career penalty shot.

Kochetkov, who went more than 151 minutes without allowing a goal, made 15 saves for his sixth win in the team’s last seven games. Carolina has a nine-game points streak, capped by a performance with few glitches.

"We were sharp and all over it," Hurricanes coach Rod Brind’Amour said.

Ryan Donato and Daniel Sprong scored for Seattle and Philipp Grubauer made 36 saves. The Kraken finished a four-game trip 1-3-0.

"We knew what this stretch looked like," Kraken coach Dave Hakstol said. "We’re disappointed to go home with two points out of the eight (possible) points."

Svechnikov scored unassisted 10:10 into the game after a terrible Seattle turnover. Stepan’s first goal of the season came with 2:08 left in the opening period. He had been without a goal throughout his first 25 games this season.

"It’s a confidence thing. It’s always nice to score," Stepan said. "It definitely builds that momentum a little bit. If you really to start to beat yourself up, it just gets worse. I think there was a stretch where it was for me."

Stepan had more than 11 minutes of ice time for the first time since Nov. 9. Brind’Amour said he had provided other assets.

"If you’re doing it right, eventually it’s going to go in for you," Brind’Amour said. "He’s not playing a ton of minutes, and I’m not expecting him to score a ton of goals."

Noesen gave the Hurricanes a goal on a penalty shot for the first time since March 2017. Noesen converted on a slap shot.

"I don’t think anyone is going to stop that one," he said.

The second period also featured Kochetkov’s save on Sprong’s breakaway before Donato’s goal on a redirection at 11:26. That ended Kochetkov’s scoreless stretch at 151 minutes, 26 seconds. Still, he broke the franchise’s rookie goalie record for longest scoreless streak.

Sprong made it a one-goal margin with 10:46 remaining.

Grubauer was an unexpected starter for the Kraken after Martin Jones was scratched.

"He battled hard," Hakstol said. "He gave us a chance to stay within striking distance in this game. … We stayed with it. We didn’t come apart. We didn’t try to start doing things on our own or get off the page."

The Hurricanes held a 27-11 in shots through two periods.

Both teams were 0 for 2 on power plays. That might be more concerning for the Kraken, which is in a 1-for-18 stretch across the last six games.

"We had, in the second period tonight, outstanding opportunities early in the power play and didn’t sustain it to the next group coming out," Hakstol said.

Stepan, a 13-year NHL veteran, now has scored against all 32 active NHL teams. … Hurricanes center Sebastian Aho missed his third game in a row with a lower-body injury, but forward Jesper Fast was back following a two-game injury-related absence. … Seattle’s Yanni Gourde had an assist on his 31st birthday. He also had an assist seven years earlier on the only other occasion of playing an NHL game on his birthday.