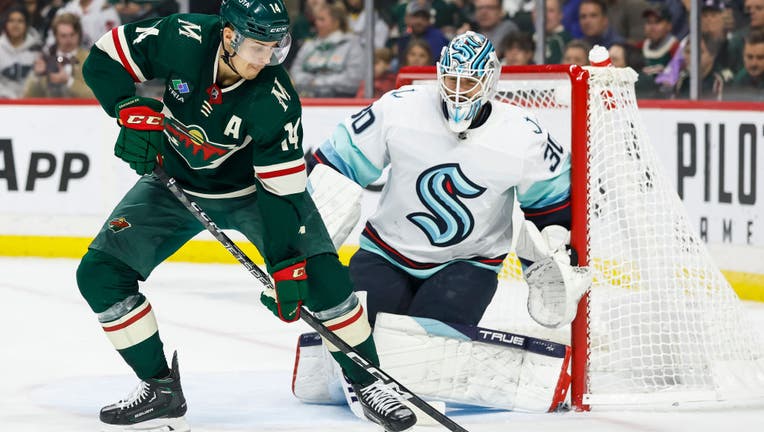 ST. PAUL, MN - NOVEMBER 03: Martin Jones #30 of the Seattle Kraken defends his net against Joel Eriksson Ek #14 of the Minnesota Wild in the first period at Xcel Energy Center on November 3, 2022 in St. Paul, Minnesota. (Photo by David Berding/Getty

Morgan Geekie and Jamie Oleksiak also scored for Seattle, winners of three straight and four of five in its second NHL season.

"There’s no secret to it. I wish we could say that there is, but it’s just a hard-working team. Everyone’s fighting for one another," Wennberg said.

"We’re having a good time. I think we’re playing solid hockey, both ends of the rink. We’re making plays out there. The more we can create more offense, I think we’re going to be solid and keep going," Geekie said.

Despite leaving plenty of juicy rebounds, Jones kept Minnesota off the scoreboard for his first shutout since April 2, 2021. His best saves were stuffing Joel Eriksson Ek from point-blank range on a rebound late in the second and thwarting Mason Shaw’s attempt just outside the blue paint in the final minute of the period.

Jones said his mindset is to stay in the moment, but he knew those stops were critical.

"Momentum is a big part of games and to go in with a three-goal lead and then come out and really shut them down for the first five, six minutes of the third period was really good," Jones said.

Off a Minnesota turnover, a shot from Daniel Sprong was deflected into the air. Standing in front, Wennberg attempted a soccer-like header on the puck. He missed, but the puck fell high off his back and deflected into the Wild net for a 3-0 lead.

"I saw the puck right away, so I had plenty of time," Wennberg said. "The first thought was actually try to head it sideways but you’re not allowed to score with your head so I tried to duck last second. Hard to say that was what I wanted to do."

Officials initially ruled no goal, but a video review overturned that call — much to the dismay of the vocal Wild fans expressing displeasure. They’d had little to cheer about at that point.

After a scoreless opening period in which Minnesota didn’t get its first shot until 11 1/2 minutes in, Geekie redirected a harmless-looking shot from Sprong at the half wall early in the second to make it 1-0.

Geekie has goals in three straight games and four of five.

Six minutes later, an odd-man rush worked to perfection for the Kraken with a give-and-go between Oleksiak and Yanni Gourde resulting in Oleksiak tucking home a feed. The defenseman has three goals in his past five games.

Wennberg added his second of the night on a third-period redirect. It was his first multi-goal game since a hat trick on May 8, 2021.

Marc-Andre Fleury stopped 19 shots for Minnesota, which had won four of five.

"We know that they’re a hard-working team and they just battle and compete kind of from the top down. We didn’t match that whatsoever tonight," Wild defenseman Matt Dumba said.

Minnesota skated 11 forwards and seven defensemen because four wingers remain out with upper-body injuries. Jordan Greenway has resumed skating and could return for next week’s West Coast trip. No updates were provided on Brandon Duhaime, Marcus Foligno and Ryan Hartman.

"Would we like some guys back that are regular NHL hockey players? Sure. If they are, wonderful. If they aren’t, then we need people to step up and provide us with game within our lineup," coach Dean Evason said.

Tied for the team lead with five goals in the first 11 games, Kraken LW Jared McCann did not play, nor was he at morning practice. Seattle coach Dave Hakstol said after the game that McCann is day-to-day with a lower-body injury. Shane Wright, the fourth overall pick in the 2022 draft, returned after sitting out four games to center the third line. Gourde moved to wing.

Wild: Play three games in four days on a trip that begins Tuesday in Los Angeles.