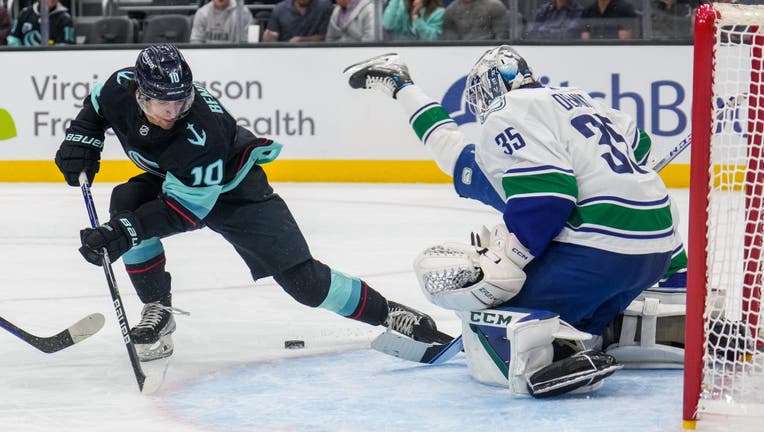 SEATTLE, WA - OCTOBER 27: Thatcher Demko #35 of the Vancouver Canucks saves a shot by Matty Beniers #10 of the Seattle Kraken during the first period of a game at Climate Pledge Arena on October 27, 2022 in Seattle, Washington. (Photo by Christopher

SEATTLE - This is the type of game that might actually kick-start a rivalry between the Seattle Kraken and Vancouver Canucks.

Ilya Mikheyev scored a pair of goals as the Canucks earned their first victory of the year in a 5-4 loss by the Kraken on Thursday night.

It's difficult to declare the geographic neighbors as rivals when only one side had been victorious up to this point. The Canucks won all four meetings between the two teams in the Kraken's inaugural season.

However, Thursday's game felt like a battle between longtime adversaries as numerous fights broke out during the game. Vancouver came into the game with a desperation spirit after opening their season 0-5-2.

Seattle had a chance to move to 4-3-2 on the year and keep themselves in solid early season position before a difficult four-game stretch ahead. Instead, the Canucks keep their unbeaten streak against the Kraken alive as they move to 5-0 all-time against Seattle.

"We knew they were going to be a desperate team. Everyone knows what's going on. We had our chances. We obviously didn't really capitalize on the power play when we needed to," Jordan Eberle said.

Special teams hurt the Kraken in the contest. Vancouver entered the night as the worst team in the league on the penalty kill at just 57.1 percent. However, the Kraken were unable to convert on any of their first three power play chances on the night with the game in the balance. Meanwhile, the Canucks picked up two of their five goals on the man advantage.

"We were the better team for most of the night but they beat us on specialty teams by one and that was ultimately the difference in the hockey game," head coach Dave Hakstol said.

"We missed the net four times in one sequence. We did that a little bit even right down to the end with the goaltender pulled there in the last 15 seconds. We didn't get that puck in the scoring area. We missed by a little bit and then when it's wide or over the net there's no second opportunity and that was one of the things on the power play that would have been better tonight."

The Kraken now have two meetings ahead with Sidney Crosby and the Pittsburgh Penguins over the next 10 days and road trips to the Calgary Flames, Minnesota Wild and Pittsburgh coming after Saturday's home outing against the Penguins. While Seattle beat the defending Stanley Cup champion Colorado Avalanche last Friday, they've also been the only victories for the Canucks and Anaheim Ducks (1-5-1) as well.

The Canucks entered the contest as the only winless team in the NHL. They've led in most of the games they'd played this season before seeing their leads slip away. Thursday night was no exception as Vancouver jumped out to an early 1-0 lead as Mikheyev chipped a rebound by Martin Jones.

Jamie Oleksiak scored his second goal in as many games for Seattle to even the score at 1-1. Oleksiak's shot from inside the blue line slipped under the left pads of Thatcher Demko to even the game with 1:21 left in the first period.

Just over a minute later, Jared McCann skated in on Demko all alone after a terrific redirected pass from Yanni Gourde. McCann's shot deflected off Demko's glove and snuck behind him to give Seattle a 2-1 lead. It's the fourth straight game with a goal for McCann, which is a new career-high.

In the second period, Karson Kuhlman was unable to control a puck that got caught in his skates and it came free to Mikheyev for a power play goal to even the game at 2-2. Andrei Kuzmenko added a power play goal as well as he redirected a pass from J.T. Miller by Jones to put the Canucks on top at 3-2.

But just 15 seconds after Kuzmenko's goal, Matty Beniers tied it up again for Seattle. Jaden Schwartz delivered a spinning pass off the boards to a streaking Beniers, who beat Demko glove side with a sharp wrister. It's the third straight game with a goal for Beniers, also a career-high. Jordan Eberle earned his 600th career point in the NHL by getting the secondary assist on Beniers' goal.

"I've been fortunate enough to play with a lot of talented players and come in at a young age. So I've just tried to be as consistent as possible. And that's the biggest thing if you want to stay in this league," Eberle said.

Vancouver jumped back ahead early in the third period. A back-handed toss from Luke Schenn was swatted down by Carson Soucy, but the puck jumped back off the ice and Elias Petterson knocked it over Jones' shoulder out of the air to make it a 4-3 game.

Seattle made a late push but Conor Garland picked up an empty net goal with 1:25 left to play on a clear out of the Canucks zone to make it a two goal lead.

It was a necessary goal for Vancouver, too, as Schwartz added a late power play goal for Seattle, gloving the puck out of the air on Demko's door step and knocking it in for a goal. André Burakovsky had a good look in the closing 20 seconds sail wide and a second chance was stopped by the ankle of Miller for a block as Seattle fell short on the rally.

"Five-on-five, you know, you're not gonna be able to carry momentum all night, but we carried momentum for a lot of the night," Hakstol said. "Didn't give up a whole lot of zone time, didn't give up a whole lot defensively. But like I said on specialty teams we weren't able to get the timely power play goal and on our PK, it was a matter of, you know, finishing. We did everything right except get the clears and maybe on that second one either a clear or a save and that makes all the difference."

Adam Larsson (vs. Tanner Pearson), Soucy (vs. Miller) and Morgan Geekie (vs. Kyle Burroughs) all served fighting majors in the game for Seattle.