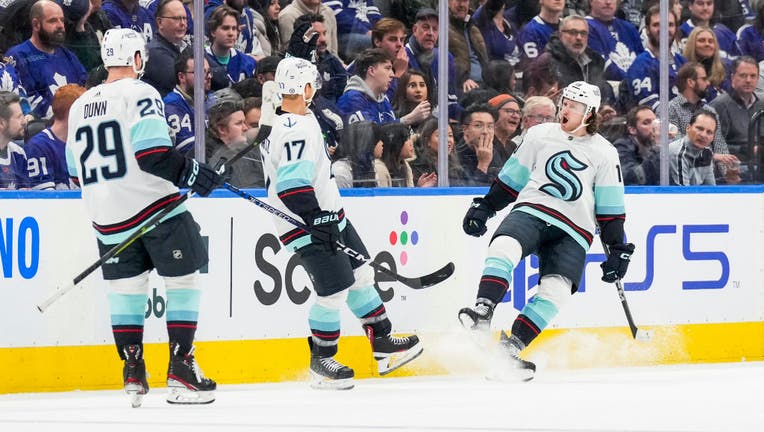 TORONTO, ON - JANUARY 5: Jared McCann #19 of the Seattle Kraken celebrates his goal against the Toronto Maple Leafs with teammates Carson Soucy #28 and Jaden Schwartz #17 during the second period at the Scotiabank Arena on January 5, 2023 in Toronto,

TORONTO - Vince Dunn had a goal and two assists, Martin Jones stopped 26 shots and the Seattle Kraken beat the Toronto Maple Leafs 5-1 on Thursday night for their third straight victory.

"We shot a lot of pucks tonight from all sorts of angles," Dunn said. "That’s really important to keep the goalie honest and for us to establish a forecheck."

Jared McCann had a goal and an assist to help Seattle improve to 21-12-4. Eeli Tolvanen opened the scoring for the Kraken on the power play, with Matty Beniers and Alex Wennberg adding goals.

John Tavares had a power-play goal for Toronto and Matt Murray made 21 saves. The Maple Leafs dropped to 23-9-7.

Just 14 seconds after Tavares tied it midway through the second period, Dunn handcuffed Murray with a wrist shot that dropped to the ice off the goalie’s arm and slid over the goal line.

McCann made it 3-1 shortly afterward, taking a lead pass from Jaden Schwartz for a clean breakaway. He snapped a shot past Murray, pumping his fist as he curled away past the goal in celebration of his team-leading 18th goal of the season.

"We have to do a better job, obviously, of executing those details, especially in certain moments of the game to continue to give us a chance and be right there," Tavares said. "Especially when we did a lot of good things in the first half."

Kraken: At Ottawa on Saturday in the third game of a seven-game trip.

Maple Leafs: Host Detroit on Saturday night in the finale of a three-game homestand.