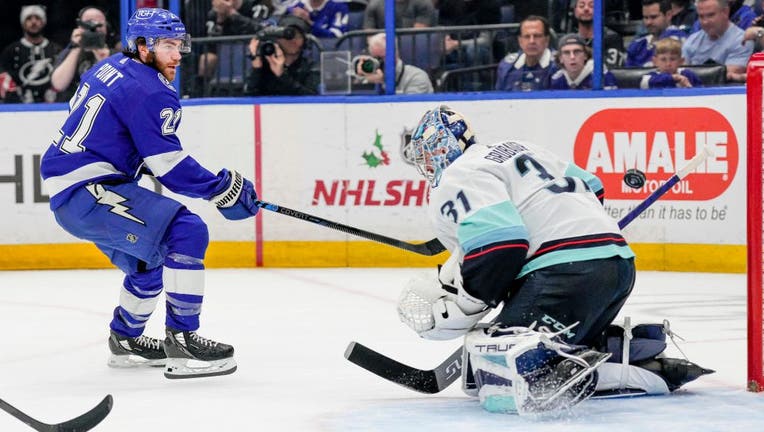 Andrei Vasilevskiy made 36 saves, and Ian Cole, Erik Cernak and Steven Stamkos had the other Lightning goals. Tampa Bay has won all three games against the second-year Kraken, outscoring them 13-3.

The surging Lightning have won 11 of 14 overall.

Stamkos extended his point streak to 14 games (nine goals, 12 assists) with his third-period goal. He is three short of becoming the 47th NHL player to reach 500 goals.

"Honestly, the McDavids, the Points, the Kuchs, these guys can play at a high rate of speed, but they can do it with the puck," Tampa Bay coach Jon Cooper said. "Everybody can skate up and back and stop and start all day. You do it with the puck, you do it with pucks in the air, timing, it’s so hard to do, and you’re watching the best players in the world do it."

Jared McCann and Ryan Donato scored for the Kraken, who dropped to 9-3-1 on the road. Two of those losses have come in the last three games.

Seattle’s Philipp Grubauer allowed four goals on 20 shots before being pulled in the second.

After Perry got his 410th goal on the power play at 12:13, Point ended Grubauer’s night when he skated in from the neutral zone, eluded a couple of defenders and put home a backhand at 13:28.

Point has a four-game goal streak, and has nine goals in his last nine games.

"He’s an elite player, and he can do elite things," Cooper said.

Colton capped the outburst with a deflection that got past Martin Jones with 4:24 remaining in the second.

Cole opened the scoring 91 seconds into the game before Cernak made it 2-0 on his first goal in 66 games at 7:24 of the first.

Kucherov got his second assist and 400th overall on a nifty backhand pass from along the boards at the defensive blue line to Point, who set up Cernak.

Jordan Eberle blocked Cole’s shot and then assisted on McCann’s 2-on-1 goal with 1:21 left in the first.

Seattle D Cale Fleury and Lightning D Haydn Fleury both played. It was the third time the brothers faced each other in an NHL game. They also played in the same game for the Kraken twice last season.

NOTES: Kraken D Jamie Oleksiak served the second game of a three-game suspension for an illegal check to the head on Friday. … D Justin Schultz, hit into the boards from behind Sunday by Florida’s Ryan Lomberg, didn’t play. "Right now I’ll label it day to day," Hakstol said. "We’ll see where it goes from there." ... Lightning D Mikhail Sergachev left late in the third after blocking a shot.