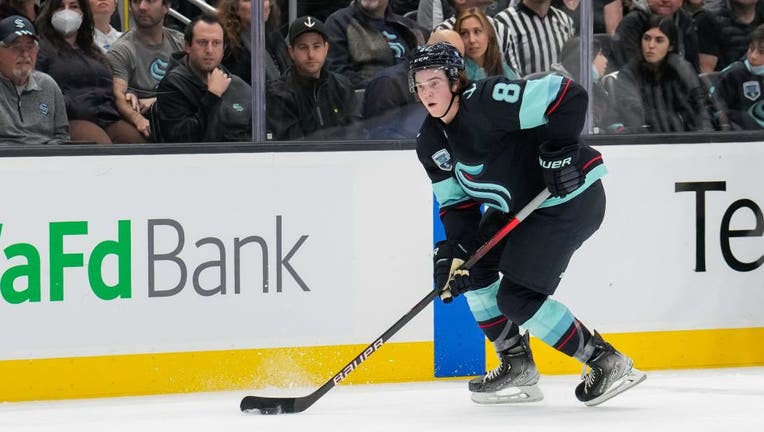 SEATTLE, WASHINGTON - APRIL 09: Cale Fleury #8 of the Seattle Kraken skates the puck along the blue line against the Calgary Flames during the first period of a game at Climate Pledge Arena on April 09, 2022 in Seattle, Washington. (Photo by Christop

The Seattle Kraken have reached an agreement with defenseman Cale Fleury to re-sign with the team on a one-year deal worth $750,000.

The deal is a two-way contract that will allow him to move up and down between the Kraken and AHL affiliate Coachella Valley.

"Cale took another step in his development last year, specifically with his offensive game while playing for Charlotte," general manager Ron Francis said in a statement.. "We are excited that we have reached an agreement for Cale to return to the Kraken organization."

Fleury appeared in nine games for Seattle last season while spending most of the year with AHL Charlotte. In 58 games for the Checkers, Fleury had 33 points with seven goals and 26 assists, which led all Charlotte defensemen. His 26 assists and 33 points were career-highs at the AHL level.

Fleury will provide some depth on the blue line for Seattle. Jamie Oleksiak, Adam Larsson, Justin Schultz, Vince Dunn and Carson Soucy are the top five defensemen entering the season for the Kraken. Will Borgen returns as the penciled-in sixth option. Fleury, 2021 draft pick Ryker Evans and veteran Michal Kempny will be competing for back-end roster spots.