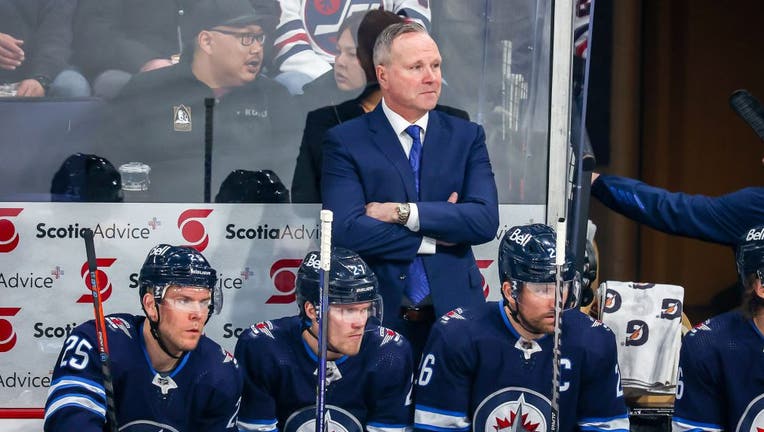 WINNIPEG, MB - APRIL 29: Interim Head Coach Dave Lowry of the Winnipeg Jets looks on from the bench during first period action against the Calgary Flames at the Canada Life Centre on April 29, 2022 in Winnipeg, Manitoba, Canada. (Photo by Jonathan Ko

Lowry joins Jay Leach, Paul McFarland and Steve Briere on the Kraken's coaching staff. He spent the last two years coaching with the Winnipeg Jets. He became the team's interim head coach in December after the resignation of Paul Maurice as the team's head coach.

"Dave brings experience to our coaching staff," general manager Ron Francis said in a statement. "He had a long and successful NHL playing career and has significant coaching experience at the NHL and junior ranks. Dave will be a valuable addition to Dave Hakstol’s staff."

Lowry, 57, brings vast NHL playing experience to the Kraken staff in addition to his time coaching on the bench. Lowry spent 19 seasons in the NHL as a player from 1985-2004. He played for the Vancouver Canucks, St. Louis Blues, Florida Panthers, San Jose Sharks and Calgary Flames, totaling 351 points (164 goals, 187 assists) in 1,084 games, which including a trip to the Stanley Cup Final with Florida in 1995-96.

Once his playing career was done, Lowry jumped straight into the coaching ranks in the Western Hockey League. He worked up from an assistant coach with the Calgary Hitmen to take over as their head coach in 2008. Lowry then joined the Calgary Flames at the NHL level as an assistant in 2009.

Lowry has coached with the Flames, Los Angeles Kings and Jets at the NHL level. In addition to time with the Hitmen, he's also served as the head coach of the Victoria Royals and Brandon Wheat Kings of the WHL.