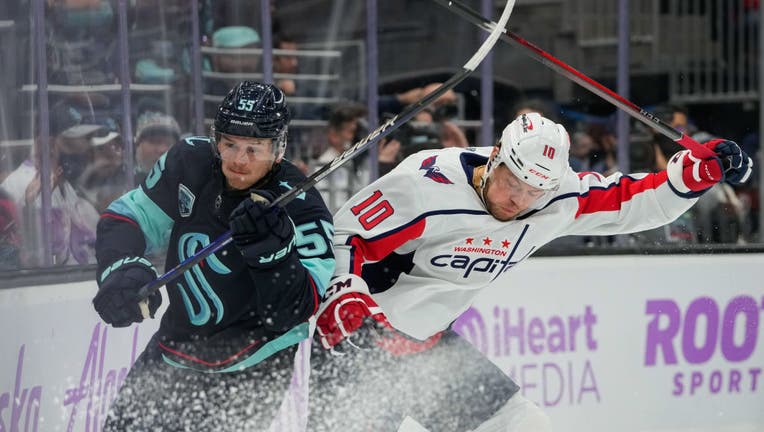 The Kraken are getting a 2022 fourth-round pick and a 2023 sixth-round pick from Washington along with Sprong.

Sprong, 25, is in his sixth NHL season and has spent the last two seasons with the Capitals. He has played in 47 games for Washington this season with 14 points (eight goals, six assists). For his career, Sprong has scored 40 goals and notched 24 assists in 186 games for the Capitals, Anaheim Ducks and Pittsburgh Penguins.

"Daniel brings some speed and creativity to our roster," general manager Ron Francis said in a statement. "We're looking forward to adding him to our team."

Sprong said on a Zoom call with reporters that he wasn’t expecting a trade, but he’s looking forward to playing for Seattle.

"We played them in Seattle. It's a good fan base and the building gets pretty loud. ... I'm excited to bring my skillset to the team," he said.

Sprong said he was expecting a breakout season this year with Washington that ultimately just didn't materialize as he'd hoped.

"I think just the expectation everyone had of me going into this year, I had those expectations for myself as well," Sprong said. "I thought it was going to be a breakout year and just the puck wasn't really dropping for me. I've had some really good opportunities to put the puck in the net and just missed my opportunities.

"And I think if a couple of those go in earlier in the year, you know, I think it puts a little bit less pressure on on yourself and you relax a little bit more. Just I think that that was a big part of it just the pressure of knowing that I can produce this way and everyone expecting it. But I had the chances, they just didn't go in.

"I know I can be a productive player in this league and I'm gonna get 20 games there in Seattle to show it."

Johansson, 31, returns to Washington, where he spent the first seven seasons of his NHL career. Johansson appeared in 51 games for the Kraken this season. He scored 23 points (six goals, 17 assists). Seattle acquired Johansson in the expansion draft from the Minnesota Wild.

The trade is the fifth of the last week for Seattle. Calle Jarnkrok was traded to the Calgary Flames for a trio of draft picks. Mark Giordano and Colin Blackwell were dealt to the Toronto Maple Leafs for a trio of draft picks. Jeremy Lauzon was sent to the Nashville Predators for a second-round pick, and Mason Appleton was dealt to the Winnipeg Jets for a future fourth-round pick.

With the players moving out, the Kraken recalled forward Kole Lind from AHL-Charlotte. Joonas Donskoi was also activated from injured reserve.

The trade now gives Seattle 34 draft picks in total over the next three years.