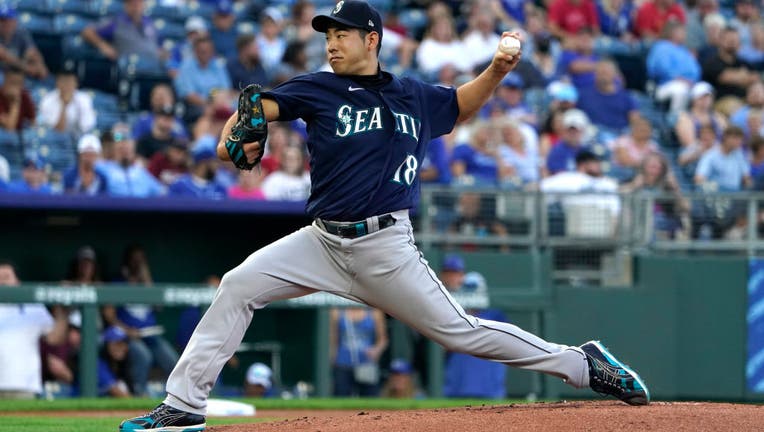 SEATTLE - Left-handed pitcher Yusei Kikuchi is leaving the Seattle Mariners after the team declined a club option on the All-Star and Kikuchi opted for free agency.

Kikuchi could have exercised a one-year player option, but instead is choosing a fresh start elsewhere after struggling over the second half of last season.

Seattle also announced Wednesday that it would not be picking up the option on third baseman Kyle Seager, a move that was long expected.

Kikuchi’s fate was one of the big questions for Seattle entering the offseason. For the first half of 2021, it seemed likely the team would exercise the option on the Japanese lefty after he went 6-4 with a 3.48 ERA and was Seattle’s lone All-Star selection.

But Kikuchi collapsed in the second half of the season and had to be removed from the rotation during Seattle’s push for a postseason spot in the final weeks. Kikuchi was 1-5 with a 5.98 ERA over his final 13 outings. In three of his final four starts, Kikuchi didn’t last beyond three innings.

"Not the way I think anybody envisioned the season ending for him, certainly with the way it started," manager Scott Servais said after the season. "But you have to make adjustments, you have to do what’s best for the team and at the time I thought that was the best thing for the team."

If Seattle had exercised its option on Kikuchi, it would have locked him in for $66 million over four years, but the Mariners didn’t seem willing to make that commitment based off his second-half performance.

Had Kikuchi exercised his player option, it would have been for $13 million for one season.

The move with Seager was first reported by The Seattle Times and was expected since the start of the season. Seager’s option would have been for $20 million, but both sides seemed ready for the relationship to come to an end. Seager will receive a $2 million buyout.

The separation seemed apparent on the final day of the regular season when Seager was tearfully removed from the finale as a last send off after 11 seasons with the club.

Seager, who turned 34 on Wednesday, hit a career-high 35 homers and had 101 RBIs. The increase in power production caused his batting average to dip to .212, a career-low for a full season.