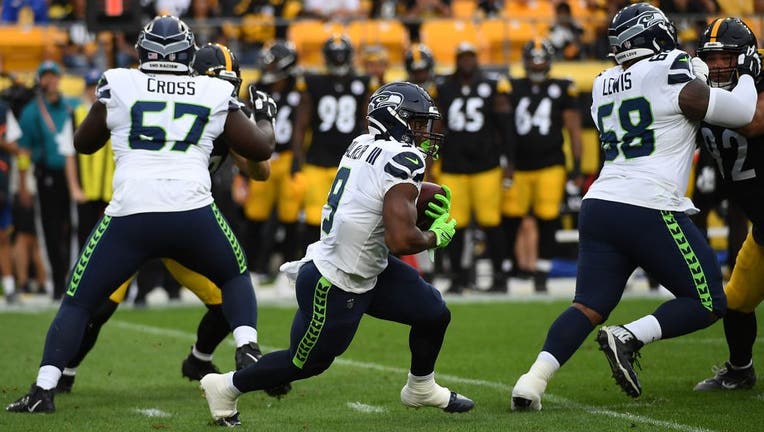 PITTSBURGH, PA - AUGUST 13: Kenneth Walker III #9 of the Seattle Seahawks in action during a preseason game against the Pittsburgh Steelers at Acrisure Stadium on August 13, 2022 in Pittsburgh, Pennsylvania. (Photo by Justin Berl/Getty Images)

A month removed from a procedure to address a hernia following the team's preseason game against the Pittsburgh Steelers, Walker is set to return to action. He practiced throughout the week for Seattle and was not listed on the team's final injury report on Friday.

"Kenny made it through the week and I just walked off the field with him. He's really excited to be ready to go," head coach Pete Carroll said.

Walker said the injury surfaced after the Steelers preseason game and wasn't something that he'd previously been dealing with.

"It was real sudden," he said. "It's something that was like something to take care of early. So I'm glad it happened before the season."

Walker had to sit and watch on the sidelines last week as Seattle won their season opener against the Denver Broncos. It was the first real NFL game that he'd even seen in person.

"Being out there in the stadium and the 12s are so loud. They told me about it but being in there's actually a crazy atmosphere," Walker said.

Walker said he wanted to be out on the field helping his teammates out, but that it was the right call to take his time with the recovery. Carroll said they had him take some blows to his midsection in practice this week to confirm that he was back and ready to go.

"It feels good. Just trying to get comfortable again, getting a feel of being on the field again with the guys. But I'm happy to be back," Walker said.

Carroll said that Walker wasn't a great pass blocker in college at Michigan State, but they were impressed with the jump from how he dove into that work when he got on the field with Seattle.

"And it was just a statement about his pride and how tough he is and how committed he is to being everything he can be and all of that," Carroll said. "And the rest of it is he's got great speed, he's extremely elusive, tremendous side-to-side ability to get away and escape. He caught the ball really well. And then all of that and he's a tough ass. You know, he's just a tough frickin' dude that doesn't want to give up nothing. And so you put all that together you got a really fine looking guy. So we've been really high on him."

Fellow running back Rashaad Penny is eager for Walker to make his debut as well.

"I can't wait," he said. "This is the moment he'd been waiting for. You should have seen him on the sideline last week. You know, he just kept smiling and always talking about how he wanted to get in and make a contribution and it's time for him now and I can't wait. I'm his biggest fan for sure."

In addition to Walker, left guard Damien Lewis is also set to make his season debut against the 49ers on Sunday.

Lewis suffered a significant ankle spring in Seattle's second preseason game against the Chicago Bears. However, the injury appeared much worse at first with Lewis being carted off the field. Nothing was broken and it wasn't even a high-ankle sprain. Instead, it was a lateral ankle sprain which meant a shorter recovery time.

"He's ready to go. He did everything in practice so he's ready to play the game," Carroll said.

Carroll didn't say that Lewis would start, however. Phil Haynes started in place of Lewis last week against the Denver Broncos and would get the nod again should the team elect to give Lewis one more week before returning to the starting lineup. It also wouldn't be atypical for both to play if Seattle wanted to manage Lewis' reps.

Cornerbacks Artie Burns (groin) and Justin Coleman (calf) are both listed as questionable to play.

Burns returned to limited participation in practice on Friday, but Carroll said it's unlikely he'll be able to go this week.

"This is the most he's done and he's close," Carroll said. "It's going to be hard for him to play this week but he's finally getting back on the ground and running and doing some stuff and he was a practice today."

Burns suffered the injury in a training camp practice in August.

Meanwhile, Coleman pulled his calf during practice this week. He had an MRI ahead of practice on Friday to determine the extent of the injury.

"He just felt his calf tighten up a little bit and he just thought he was fine, wanted to finish practice (on Thursday). We held him out," Carroll said.

The team had not received results of the MRI before practice ended on Friday. If Coleman can't play, rookie Coby Bryant would take on the nickel cornerback duties against the 49ers.

"He's ready to go. He's ready to go," Carroll said. "Got good work. He's been focusing on it for a good, good while now and there's a lot of really positive things that he does. He's a good football player so we're anxious to see him go."

Safety Joey Blount is doubtful to play due to a minor hamstring strain in practice as well.

"Just tweaked his hammy late in practice yesterday," Carroll said. "It's a real slight pull on it but it's gonna be hard for him to make it this weekend. But it's about as minor as you can get but it did register so we know he's got something."

Safety Jamal Adams is going to have surgery in the coming days and the team will know about his timeline after the procedure is complete, though it's anticipated he'll miss the rest of the season.

Adams stopped by practice on Friday and addressed the team at the end of the session from a wheelchair with his left leg in a brace.

"It was really good," Carroll said. "He had a chance to speak to the whole crew. He's just such a heartfelt guy and he just let it out and told the guys what he was thinking and how grateful he was about the win. They were trying to haul him out of the stadium and he went up in the box or something and got a chance to watch the finish of it and was going crazy about the end and the way the defense played and all that. It was great to reconnect for everybody."

Cornerback Coby Bryant said it was good to see Adams out on the field before he heads off for his surgery.

"That's big bro, so I was happy to see him, see that he had positivity," Bryant said. "It's hard seeing him like that, I obviously wanted to play with him this year, but things happen for a reason, and he's going to come back better."

New Seahawks safety Teez Tabor had a chance to remain with the Atlanta Falcons when Seattle came calling for additional safety depth following the injury to Jamal Adams last week.

Instead, Tabor saw an opportunity with the Seahawks and jumped on it.

"Just had to take a leap of faith. Felt like it was the right decision for me," Tabor said on Friday.

Tabor spent the last two seasons playing for Seattle assistant coach Sean Desai with the Chicago Bears and had familiarity with the team's new defensive scheme through that connection. Tabor said the Falcons gave him a chance to stay with the team with a promotion to their 53-man roster as well as he'd been on the team's practice squad. Instead, Tabor chose to join the Seahawks.

A former cornerback, Tabor made the transition to safety under Desai in Chicago. Along with the familiarity with Seattle's scheme, his versatility made him the right fit for the Seahawks as they sought depth in the wake of Adams' injury.

"Sean knew him really well, knows the system and all that. That was a big deal," Carroll said. "We were looking for somebody, if somebody had to come up and help us right away, then we wanted somebody from the system if we could. And so fortunately we were able to swing it."

Tabor also used to play for the San Francisco 49ers, the opponent for Seattle this weekend. He was on the 49ers team in 2019 that held the Seahawks a yard shy of an NFC West crown and a 3-seed in the playoffs. Instead, Seattle was the 5-seed and had to go on the road before losing to Green Bay in the Divisional Round.

With Joey Blount out this weekend at safety and Artie Burns and Justin Coleman each questionable to play at cornerback, Tabor's likely to make his Seattle debut against his former team in San Francisco this Sunday.