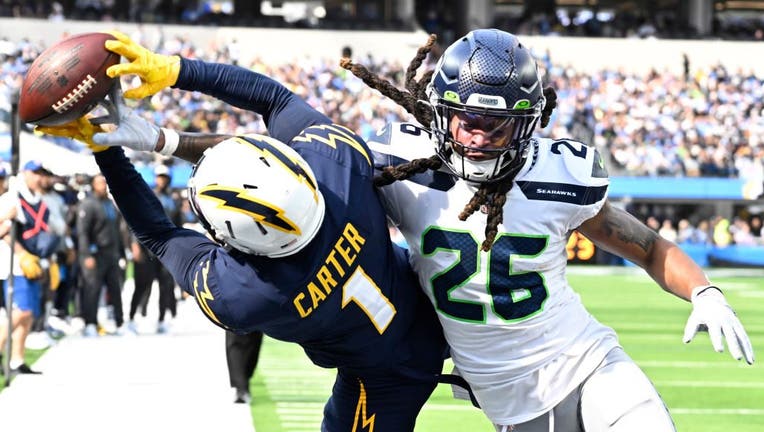 Inglewood, CA - October 23: Safety Ryan Neal #26 of the Seattle Seahawks breaks up a pass intended for wide receiver DeAndre Carter #1 of the Los Angeles Chargers in the end zone in the first half of a NFL football game at SoFi Stadium in Inglewood o

RENTON, Wash. - The Seattle Seahawks will be without strong safety Ryan Neal and nose tackle Al Woods for Saturday's game against the Kansas City Chiefs.

However, running backs Ken Walker III and DeeJay Dallas are both expected to play.

Neal's knee hasn't responded well coming out of last week's game against the San Francisco 49ers. It's an issue he's been playing through the last couple of weeks.

"Really, the Sunday to Thursday thing got him, that was just too soon," head coach Pete Carroll said. "He made it through the game and played alright in the game, but it was just too much to ask. He couldn’t get back."

Walker did not practice this week and had a back issue appear on the injury report on Friday as well. However, Carroll said he expects that Walker will play against the Chiefs.

"He’s okay, but we have to wait and see," Caroll said of Walker, who is officially listed as questionable. "He had a little something, little spasms today, but he looked good yesterday, so he should be good to go."

Meanwhile, Dallas returned to limited work in practice the last two days. He sustained a high-ankle sprain against the Los Angeles Rams three weeks ago and has missed the last two games for Seattle.

"DeeJay did well today," Carroll said. "As a matter of a fact, he looked good enough and we pulled him out of it. He had done enough to show us that he can play."

When the Seahawks waived Tony Jones Jr. on Thursday, it was a strong indication that the team felt confident at least one of the two would be able to play in Kansas City.

With Neal out, the Seahawks will turn to a combination of Teez Tabor and Johnathan Abram to take the safety snaps against the Chiefs.

"He’s really accountable, really smart," Carroll said of Tabor. "He has a good instinct of where he needs to be and how he needs to fit to his plays and all. He’s looked good, and we are going to see Johnathan play too. Both those guys will play, so it will be fun to see those guys out there, but Teez has done a really good job."

Tabor has played 36 defensive snaps for Seattle in relief of Neal over the last three weeks with a high of 24 snaps played against the Los Angeles Rams. The Seahawks signed Tabor off the Atlanta Falcons practice squad earlier this season.

Abram was claimed off waivers from the Green Bay Packers on Dec. 1. A former first-round pick of the Oakland/Las Vegas Raiders, Abram has played just four defensive snaps and 15 special teams snaps in two games for Seattle.

"They are different style players," Carroll said. "They do look different in the way that they go about it. Johnathan has done a lot of stuff in his years with the Raiders. He’s played up in the box. He’s been on the edge, the backend, a blitzer. He’s been everything. He brings a wide span of what he can do.

"But Teez is a little more classic. He’s been a cover guy in his career. He came up as a corner. He has really good coverage skills and can do some good things there. So, they are really different in the way that they play."

Woods will also miss a second straight game with his Achilles injury.

The Seahawks added defensive tackle Davyion Nixon on Wednesday to the roster with Woods injured and Bryan Mone out for the year due to a torn ACL.

Nixon was a fifth-round pick of the Carolina Panthers last year and was released by the team after appearing in seven games this season.

"He had a really great day yesterday. Honestly, we stuck him in there in pass rush stuff, and he flashed pretty good for the first time out," Carroll said of Nixon. "… I’ve seen the film and all that, so we’ll see how he fits in time. He has a good spirit about him, very open, and he has some juice to him."

Tight end Noah Fant did not practice until Friday due to a knee injury, but he will play against the Chiefs as well.

"He should be ready to go, he should be OK," Carroll said. "We have to get him through all of the way until we get to the stadium, but he’s needed all of that time. He looked good yesterday and that was enough to give us a feeling that he should be OK."

Wide receiver Marquise Goodwin is also expected to play despite being listed as questionable with wrist and ankle injuries.

H"e got tangled up yesterday and just turned his ankle a little bit," Carroll said. "It was a regular lateral ankle sprain that he should be okay. He says he is playing, and nothing is going to hold him out, so it wasn’t bad. We just needed to rest him today."