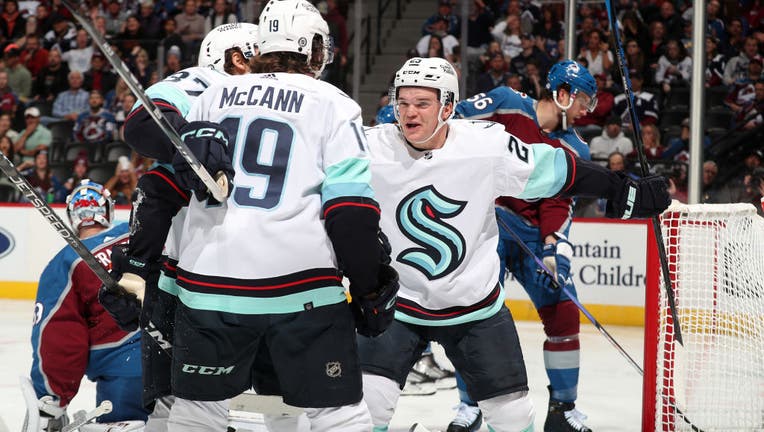 DENVER, COLORADO - OCTOBER 21: Yanni Gourde #37, Jared McCann #19 and Karson Kuhlman #25 of the Seattle Kraken celebrate a goal against the Colorado Avalanche at Ball Arena on October 21, 2022 in Denver, Colorado. (Photo by Michael Martin/NHLI via Ge

DENVER - Karson Kuhlman scored the tiebreaking goal in the third period and the Seattle Kraken beat the Colorado Avalanche 3-2 on Friday night.

Jaden Schwartz and Jared McCann scored 22 seconds apart in the second period and added an assist each for Seattle. Philipp Grubauer had 17 saves before being replaced by Martin Jones midway through the third period. Jones got the win with just one save.

Kraken coach Dave Hakstol did not have an update on Grubauer’s status after the game.

"That was an all-around good team effort," Schwartz said. "Thought we checked them hard, took away their time and space, had some pretty good (offensive) zone time. We looked quicker and a little bit cleaner coming out of our end."

Bowen Byram had a goal and an assist and Evan Rodrigues also scored for Colorado, which has dropped two straight.

"They’re solid team but I don’t think it was as much them as it was us," Byram said. "We’ve just got to find our stride. We have a really big test (Saturday) night so we got to refocus and look at our mistakes, learn from them and turn the page."

Kuhlman put the Kraken ahead when he maneuvered around Kurtis McDermid and beat Pavel Francouz with 7:54 left in the third.

"Schwartzy makes a good play, putting puck into space. Let me skate into it," Kuhlman said. "He was kind of draped on me there. I usually like to get that puck to the far post, kind of beat the goalie over there, but saw a little opening and was able to put it in the net."

The game was scoreless after the first period but the teams combined for three goals in the first six minutes of the second. Schwartz scored a power-play goal at 1:38 with a one-timer from the slot, and McCann’s second goal of the season made it 2-0 just 22 seconds later.

The Avalanche cut the lead in half when Rodrigues scored off a feed from Valeri Nichushkin at 5:55 for his first goal in a Colorado sweater. Nichushkin had two assists.

"It felt good, however it’s not the result we wanted," Rodrigues said. "But good to get that one out of the way."``

Byram scored a short-handed goal at 6:58 of the third to tie it.

Kraken left wing Andre Burakovsky was honored on the scoreboard in his first game back in Denver since signing with Seattle in the summer.

Burakovsky played three season with the Avalanche and was a key part of their run to the Stanley Cup title. He scored the overtime goal in Game 1 of the final against Tampa Bay and finished with three goals and five assists in 12 postseason games.

Colorado played a short video of his highlights with the team, and he raised his stick to the crowd as it cheered him on.

Kraken: At the Chicago Blackhawks on Sunday.

Avalanche: At the Vegas Golden Knights on Saturday night.