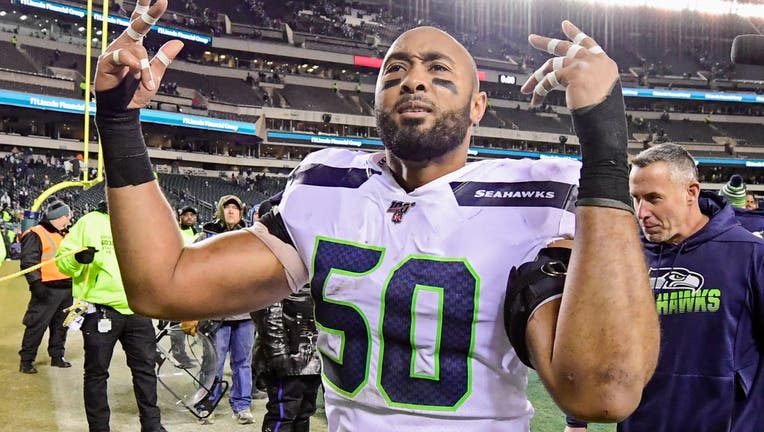 K.J. Wright #50 of the Seattle Seahawks celebrates his teams win over the Philadelphia Eagles in the NFC Wild Card Playoff game at Lincoln Financial Field on January 05, 2020 in Philadelphia, Pennsylvania. (Photo by Steven Ryan/Getty Images)

RENTON, Wash. - Linebacker and Legion of Boom member K.J. Wright signed a one-day contract with the Seahawks on Wednesday so that he can retire in Seattle.

Wright played for the Seahawks from 2011-2020. After becoming a free agent, he signed a one-year contract with the Las Vegas Raiders.

In ten seasons with Seattle, Wright had 934 tackles which is the third most in team history.

He was a member of the Seahawks' Super Bowl winning team in 2013.

READ NEXT: Seahawks' K.J. Wright gives back in Africa: 'It's my job and my duty'

Wright teamed with Bobby Wagner to form one of the better linebacker duos in the league for the majority of their tenure together in Seattle. Wright was a Pro Bowl selection in 2016 and in 2019, at the age of 30, had career highs in tackles (132), passes defensed (11) and interceptions (three).

Wright was also named the 2018 NFL Man of the Year.