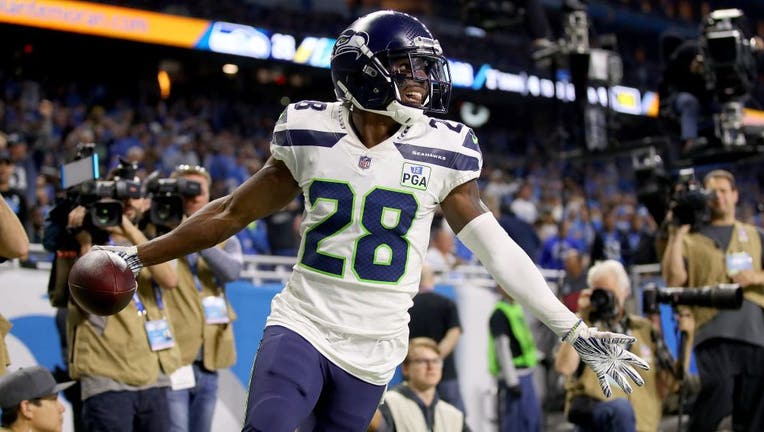 DETROIT, MI - OCTOBER 28: Justin Coleman #28 of the Seattle Seahawks celebrates his interception against the Detroit Lions during the fourth quarter at Ford Field on October 28, 2018 in Detroit, Michigan. (Photo by Gregory Shamus/Getty Images)

Both players sustained injuries in practice this week that will keep them out of the contest. Blount tweaked his hamstring while Coleman pulled his calf.

Head coach Pete Carroll said Blount hamstring issue was minor, but enough to keep him out this week. He'd initially been listed as doubtful to play before being downgraded on Saturday.

"Just tweaked his hammy late in practice (Thursday)," Carroll said. "It's a real slight pull on it but it's gonna be hard for him to make it this weekend. But it's about as minor as you can get but it did register so we know he's got something."

Coleman also was injured in Thursday's practice. He had an MRI ahead of practice on Friday to determine the extent of the injury, but the team had not seen results by the end of practice.

"He just felt his calf tighten up a little bit and he just thought he was fine, wanted to finish practice (on Thursday). We held him out," Carroll said.

Rookie Coby Bryant is set to handle the nickel responsibilities for Seattle in Coleman's absence.

"He's ready to go. He's ready to go," Carroll said of Bryant. "Got good work. He's been focusing on it for a good, good while now and there's a lot of really positive things that he does. He's a good football player so we're anxious to see him go."

Seattle elevated cornerback Xavier Crawford from the practice squad to provide additional depth in the secondary. Safety Teez Tabor was also added to the roster this week after Jamal Adams was placed on injured reserve.