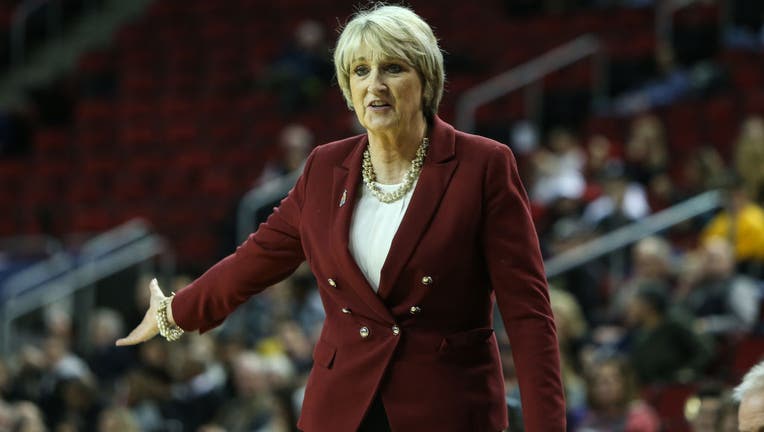 WASHINGTON - June Daugherty, the former Washington and Washington State women’s basketball coach who led the Huskies to seven NCAA Tournaments, has died. She was 64.

The Cougars went to the postseason three times under Daugherty, advancing as far as the semifinal round of the WNIT in 2016-17. But the Cougars did not reach the NCAA Tournament under Daugherty.

At Washington, she compiled a record of 191-139 in 11 seasons and went 113-85 in league play, earning nine postseason berths. That included seven trips to the NCAA Tournament, with one Elite Eight appearance in 2000-01.

Daugherty earned her first head coaching job in 1989 at Boise State, leading the Broncos to five winning seasons, an overall record of 122-75 and one appearance in the NCAA Tournament.

Hall of Fame Stanford coach Tara VanDerveer said she played against, coached with and coached against Daugherty.

"She was on my first staff at Stanford. June was a `people person’ as a coach, she was a great recruiter and an extremely positive person," VanDerveeer said.

"I had the honor to be coached by June and coach alongside of her for almost 20 years, and while she was obviously an outstanding coach who won many games, more importantly she was fun, loving and a visionary leader and mentor who has made countless players and peers lives’ better," said Arizona State coach Charli Turner Thorne.

"I benefited from the time and effort she spent to lend me advice," Gottlieb said. "Her influence on the Pac 12 Conference was vast, and she will be missed very, very much."

The Pac-12 Conference said: "June Daugherty was a shining light in the Pac-12. She will be deeply missed."

Daugherty is survived by her husband, Mike, who was her associate head coach at all three programs she ran, plus their two children and her parents.