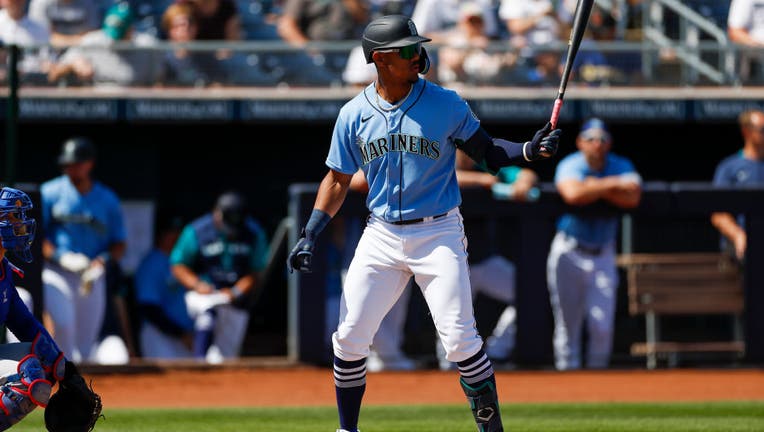 "It's time for Julio Rodriguez to play in the big leagues," manager Scott Servais told reporters.

Rodriguez, 21, is one of the top prospects in all of Major League Baseball and has been a standout performer during spring training. Rodriguez has hit .419 in spring with three home runs, four doubles, eight RBI, nine runs scored and three stolen bases.

"This will be a dream come reality right now," Rodriguez told reporters. "You work your whole life to basically get to this point right now. It's amazing, honestly. Just seeing the expression on Skip's face and just telling me 'yo, I think it's time.'"

Rodriguez has regularly been deployed in center field along with Jarred Kelenic in left and Mitch Haniger in right this spring as the team gave him a chance to play his way onto the club.

The Mariners posted a video of Rodriguez leaving Servais' office in Peoria, Ariz, with a big smile on his face, presumably after being given the news he'd made the club.

"It's on baby! It's on!" Rodriguez said while clapping his hands together. "We going. We going for this."

"That was quite a conversation," Servais said. "He is so, so excited. He’s just a fun kid. The joy and the excitement he plays with, I think it’s contagious. It’s going to serve our team very well. And I think he’s a really good player on top of it. It should be fun."

Rodriguez played in High-A Everett and quickly moved up to Double-A Arkansas last year. He appeared in 74 total games last season, batting .347 with 13 home runs and 47 RBI. Servais said they left the door open for Rodriguez to play his way onto the roster if he had a strong showing this spring. Rodriguez knocked the door down completely to find his way onto the team.

Rodriguez punctuated the decision by going 3-for-4 on Sunday against the Kansas City Royals with a home run and double.

"After I got it going, once I put my foot on the gas pedal in spring training, I just kept making my adjustment and kept going through everything, I feel that’s when it became evident I could make this ball club," Rodriguez said.

With Kelenic, Haniger and Jesse Winker, the Mariners have four outfielders they can cycle through the lineup. Winker will also see plenty of at-bats at designated hitter as well when the team gets all four in the lineup. Rodriguez will take up the center field role primarily, but he can play all three spots in the outfield.

Per the Mariners, Rodriguez will be the 3rd position player (21 yrs or younger) to break camp and debut on Opening Day for the Mariners, joining Ken Griffey Jr. (19 yrs, 133 days) and Omar Vizquel (21 years, 344 days). Both made their debuts for the Mariners in 1989.