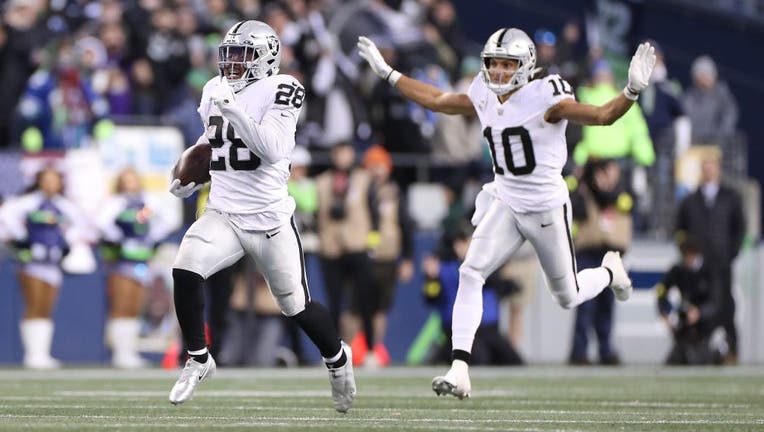 SEATTLE, WASHINGTON - NOVEMBER 27: Josh Jacobs #28 of the Las Vegas Raiders runs with the ball in overtime against the Seattle Seahawks at Lumen Field on November 27, 2022 in Seattle, Washington. (Photo by Steph Chambers/Getty Images)

SEATTLE - Once Josh Jacobs slipped past the last line of Seattle’s defense, all that was in front of him was open field and a place among the greatest single-game performances in NFL history.

Jacobs sprinted 86 yards for a game-ending touchdown and the Las Vegas Raiders won in overtime for the second straight week, beating the Seahawks 40-34 on Sunday.

"When I hit the gap, I see a big hole and I just tried to run as fast as I can," Jacobs said.

Jacobs finished with a franchise-record 229 yards rushing and two scores. He also had six catches for 74 yards, and his 303 yards from scrimmage were the most in franchise history and the seventh-most in a game in the Super Bowl era.

Jacobs had never had a touchdown run longer than 28 yards, and his extraordinary dash was reminiscent of the Raiders’ Bo Jackson running untouched for a long TD against the Seahawks at the Kingdome on Nov. 30, 1987.

Not bad for a guy who’d been listed as questionable for the game with a calf injury. There was nothing uncertain about Jacobs’ play once he took the field.

"To see him finish like that, I know what he’s been dealing with, I know how hard he works. It was really cool to see that," Raiders quarterback Derek Carr said.

Las Vegas (4-7) finished with 283 yards rushing and its 576 total yards were the third-most ever allowed by the Seahawks (6-5), who fell one game behind San Francisco in the NFC West.

"He’s hard to bring down. He’s a tough runner with good balance. You really gotta wrap him up," Seattle defensive tackle Shelby Harris said. "He’s not one of those backs that gets touched and falls. He makes his money off of breaking tackles and getting those extra yards."

Las Vegas forced overtime thanks to Carr’s 5-yard touchdown toss to Foster Moreau in the corner of the end zone with 1:54 remaining that made it 34-all. Carr threw an interception on the first play of the game but finished 25 of 36 for 295 yards and three touchdowns.

The Raiders also got a break when Jacobs appeared to fumble inside the 10 just before Moreau’s touchdown catch, but officials ruled his forward progress had been stopped.

Seattle lost its second straight after falling to Tampa Bay two weeks ago in Germany. Geno Smith was 27 of 37 for 328 yards and two touchdowns. But Seattle’s rushing attack struggled for the second straight game, although Kenneth Walker III ran for two TDs.

In overtime, Daniel Carlson missed a 56-yard field goal attempt on Las Vegas’ first possession. But Seattle went three-and-out, and on the next play from scrimmage, Jacobs broke free.

Jacobs became the fourth player in the Super Bowl era with at least 300 scrimmage yards and two touchdowns in a game, and the first since Adrian Peterson set the single-game record for rushing yards (296) in 2007. He’s the first player since at least 1950 with at least 225 yards rushing and 70 yards receiving in the same game.

"It’s kind of crazy, coming in and not knowing if I was going to play, looking the guys in the eyes and telling them they’re going to get everything they’ve got in me," Jacobs said.

The 86-yard TD run was the fourth-longest overtime touchdown in league history.

For most of the game, it appeared Las Vegas would squander its chance to win despite its unstoppable rushing attack. McDaniels twice decided to kick field goals instead of keeping his offense on the field. He also called a head-scratching toss sweep to Jacobs on fourth down in the fourth quarter that Seattle stopped.

But Carr was terrific on the tying drive in regulation. He went 6 of 8, including a spectacular one-handed catch by Davante Adams for 28 yards, and he floated the touchdown pass to Moreau perfectly into the back corner.

Seattle had a final chance to win in regulation and appeared to have a first down near midfield on Smith’s pass to DK Metcalf with 57 seconds left. But after a lengthy review it was determined Metcalf didn’t have control of the ball as he rolled over and hit the sideline. Smith was sacked by Maxx Crosby on the next play and Seattle punted.

Raiders DT Andrew Billings limped off the field in the fourth quarter and was later carted to the locker room. ... Seattle S Ryan Neal suffered an elbow injury in overtime and backup Josh Jones took a poor angle on Jacobs’ winning run.

The Seahawks announced that sometime during the 2023 season the team will wear throwback uniforms with the silver helmets, blue jerseys and silver pants Seattle sported in the 1990s.

Seahawks: At the Los Angeles Rams next Sunday.