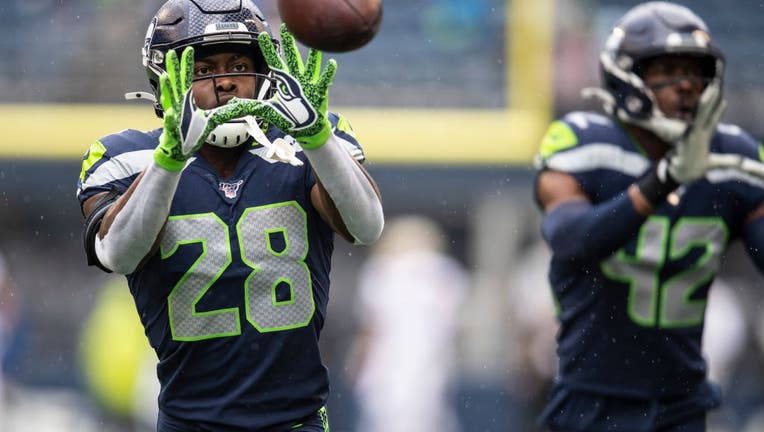 SEATTLE, WA - SEPTEMBER 22: Defensive back Ugo Amadi #28 of the Seattle Seahawks catches a ball during warmups before a game against the New Orleans Saints at CenturyLInk Field on September 22, 2019 in Seattle, Washington. (Photo by Stephen Brashear/

RENTON, Wash. - Two youngsters are about to get their chance to prove they can be long-term options to help the Seattle Seahawks’ struggling defense.

Amadi will be the nickel cornerback while Brooks’ role is still unknown. Seattle coach Pete Carroll said Wednesday that Brooks will start against the Cowboys but declined to say at which position.

“This is an opportunity for Jordan Brooks to start and so we’ll let you see how that works out,” Carroll said. “But he is going to take the opportunity to step up and be part of the three linebacker situation. So we’re looking forward to it.”

Seattle was left with two major gaps to fill on its already struggling defense going into the game against Dallas and its high-octane offense. Irvin and Blair were both lost for the season with torn ACLs last week against New England.

Blair was injured in the first half when he was caught in a pile. Irvin went down in the fourth quarter when he planted his foot and his knee buckled.

Sliding Amadi into Blair’s role is an easy transition with Amadi in his second year with Seattle and having played the position as a rookie.

The uncertainty is how Seattle will handle the adjustments at linebacker. Brooks, the Seahawks’ first-round pick last April, has primarily worked as a backup at weakside linebacker through training camp and in his limited snaps during the first two games. Veteran K.J. Wright has been the clear starter at the spot but has experience in his career on the opposite side in the role that Irvin played.

Carroll declined to answer when asked if a position swap was the plan for Wright.

“I think he made the most progress understanding the defense,” linebacker Bobby Wagner said. “I think it’s been a very tough situation for him with not having an offseason really and kind of just being thrown into the fire with not having any preseason games. So his ability to just lock in, focus in and learn the plays speaks about how much he cares about the game.”

Irvin was also one of Seattle’s primary pass rushers and that role is likely to be filled by a rotation of players, including rookie Alton Robinson. After having a solid training camp that raised some eyebrows, Robinson was surprisingly inactive for the first two games.

Amadi played significant snaps against the Patriots even before Blair’s injury. Blair moved from cornerback to safety after Quandre Diggs was ejected and Amadi stepped in at the nickel spot. It’s a role Amadi is familiar with after spending time there last season as a rookie, but his results were mixed. At times he looked capable of handling the role. At others, it was clear he was getting picked on by opposing quarterbacks.

“Everything felt kind of slowed down for me, the physical aspect and the mental aspect,” Amadi said. “Having that year under my belt really helped me a lot. Once I got out there for my opportunity I just cut it loose.”

NOTES: Seattle filled the roster spots of Irvin and Blair by signing cornerback Linden Stephens and defensive tackle Anthony Rush off the practice squad. Rush was added to the active roster for last week’s game against New England and played 15 snaps.