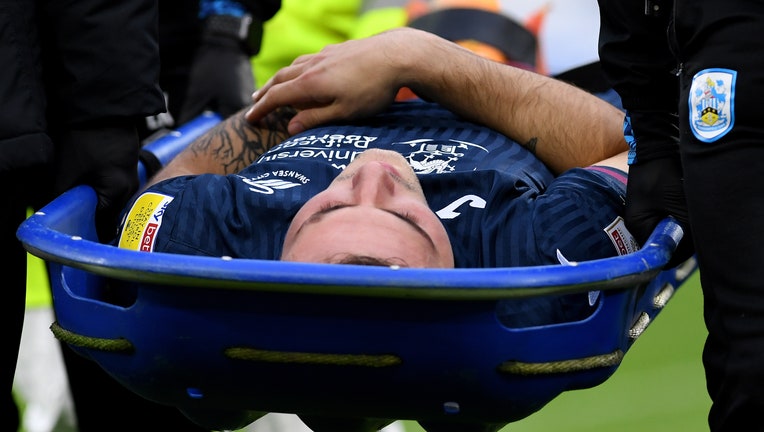 HUDDERSFIELD, ENGLAND - FEBRUARY 20: Jordan Morris of Swansea City is taken of the field on a stretcher during the Sky Bet Championship match between Huddersfield Town and Swansea City at The John Smith's Stadium on February 20, 2021 in Huddersfield,

SWANSEA, Wales - American forward Jordan Morris tore his left ACL while on loan for Swansea in the English League Championship, three years after rupturing his right ACL during a match for Major League Soccer’s Seattle Sounders.

Morris tore his left ACL on Sunday during Swansea’s 4-1 loss at Huddersfield.

Swansea said Monday he will miss the rest of the English season, and the injury appears likely to sideline him from at least the first eight U.S. World Cup qualifiers, which start in September. There are three additional qualifiers in both January and March 2022.

"It’s significant ligament damage," Swansea coach Steve Cooper said Monday. "Everything we hoped it wasn’t, unfortunately, it is. It’s the end of his season for us and a long road back to recovery. It’s very cruel."

Q13 Sports Director Aaron Levine extends a whole-hearted thanks to Morris for everything he has done.

A description of the incident on Swansea’s website said Morris "landed awkwardly after treading on the ball as he controlled a lofted pass."

The 26-year-old was loaned by Seattle to Swansea in January for the rest of the English season.

Morris missed a year of action after tearing his right ACL during Seattle’s CONCACAF Champions League match at El Salvador’s Santa Tecla on Feb. 22, 2018. His next competitive match was the Sounders’ MLS opener against Cincinnati on March 2, 2019.

Morris has 10 goals in 39 international appearances. He won the 2015 Hermann Trophy as the top player in college soccer while at Stanford.