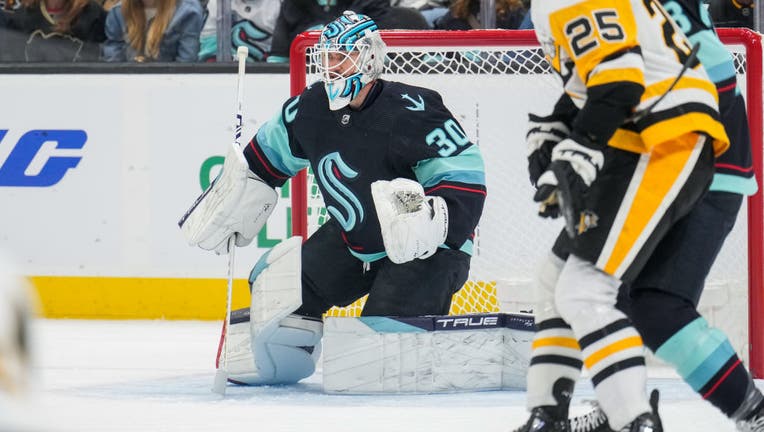 SEATTLE, WA - OCTOBER 29: Martin Jones #30 of the Seattle Kraken tends the net during the first period of a game against the Pittsburgh Penguins at Climate Pledge Arena on October 29, 2022 in Seattle, Washington. (Photo by Christopher Mast/NHLI via G

SEATTLE - Jordan Eberle and Martin Jones each welcomed new additions to their families before jumping back on the ice for the Seattle Kraken and teaming up to keep the Pittsburgh Penguins sliding.

Eberle scored midway through the second period after Seattle had two goals disallowed by challenges, Morgan Geekie scored late in the second and the Kraken beat Pittsburgh 3-1 Saturday night for the Penguins’ fourth straight loss.

"Obviously, midseason you have a baby there’s a lot going through your head, but once you get out there you kind of just zone into it a bit," Eberle said.

Eberle’s wife gave birth to the couples’ second child, while Jones and his wife welcomed their first child both on Friday. With everyone healthy, the pair quickly switched their focus back to the Penguins.

"It’s been a roller coaster," Jones said. "Just tried to wrap my head around playing hockey today and sometimes when you’re not thinking too much things work out for you. That might have been the case today."

Eberle’s goal at 11:20 of the second pulled Seattle even at 1-1 and Geekie’s goal with 1:27 left in the period gave the Kraken the lead for good.

Jaden Schwartz added an empty net goal for Seattle, his fifth of the season, while Jones stopped 32 shots in his finest performance to date for the Kraken.

Jake Guentzel scored on a breakaway midway through the second period and Casey DeSmith had 27 saves, but Pittsburgh’s road trip concluded with a thud.

The Penguins lost three straight in Western Canada before closing out its road swing against the Kraken. Pittsburgh was outscored 15-5 in losses in Edmonton, Calgary and Vancouver.

"Guys are discouraged. They’re proud guys. They care about winning. And when you go through times like this, everybody feels it because they care. We all do," Pittsburgh coach Mike Sullivan said. "So we just got to make sure that we turn our discouragement into determination."

Seattle scored four times in the second period, only to see two of the goals waved off after successful challenges by Pittsburgh. Ryan Donato’s goal at 8:09 was disallowed after it was determined he was offside on the play and entered the zone ahead of Eberle, who had the puck. Three minutes later, Andre Burakovsky slammed a rebound past DeSmith, but Pittsburgh’s challenge was successful again and it was determined the play should have been whistled for a stoppage before the goal due to a high stick.

However, on the ensuing faceoff, Matty Beniers found Eberle open at the side of the goal for his first of the season.

Late in the period, Geekie gave Seattle the lead with his second of the season, getting the rebound of Daniel Sprong’s shot and scoring from a sharp angle.

Jones had two saves to deny Sidney Crosby in the third period. First, he lunged to stop Crosby on a power play early in the period, then stopped Crosby again with 1:47 left after Pittsburgh pulled DeSmith. Danton Heinen hit the post with 7:50 remaining.

"I was able to come up with a big save early and and the boys did a great job the rest of the way," Jones said.

Guentzel returned to the lineup after missing the previous four games with an upper body injury. His fourth goal of the season was a gift from Seattle defenseman Jamie Oleksiak, who made a lazy pass at the blue line and Guentzel got a breakaway and beat Jones at 10:05 of the second period.

NOTES: Sullivan tied Ed Johnston for most games coached in Penguins history at 516. Sullivan has been in charge of the Penguins since 2015 and is the second-longest tenured coach in the league behind Tampa Bay’s Jon Cooper. ... Pittsburgh F Jeff Carter played only 4:18 and was being evaluated for a lower body injury, Sullivan said.

Kraken: Seattle is at Calgary on Tuesday.