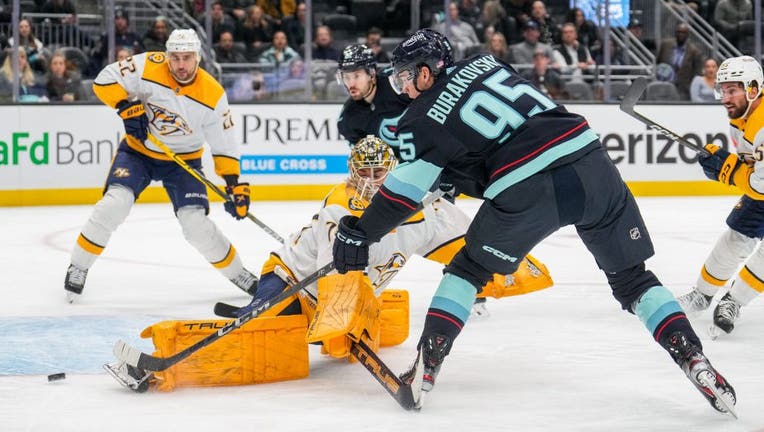 SEATTLE, WA - NOVEMBER 8: Andre Burakovsky #95 of the Seattle Kraken scores a goal past Juuse Saros #74 of the Nashville Predators during the second period of a game at Climate Pledge Arena on November 8, 2022 in Seattle, Washington. (Photo by Christ

SEATTLE - Jordan Eberle scored a pair of goals and André Burakovsky added three points with a goal of his own as part of a four-goal first period that carried the Seattle Kraken to a 5-1 win over the Nashville Predators on Tuesday night.

The victory extends a franchise-best five-game winning streak for Seattle.

Will Borgen also scored a goal as part of an offensive onslaught that forced the Predators to pull starting goaltender Juuse Saros after less than 17 minutes of action. The Kraken scored four goals on Saros in six shots before Nashville turned to backup Kevin Lankinen.

The Kraken did have to withstand some prolonged pressure from the Predators in the second period. Nashville out-shot Seattle by an 11-5 margin in the frame and got their only goal of the night on a breakaway chance from star winger Filip Forsberg. But Martin Jones erased several solid chances for the Predators in net en route to 24 saves on the night for Seattle.

"Jonesy was excellent. He was really solid throughout the entire 60 minutes," Hakstol said.

Eberle got Seattle on the board just 38 seconds in as his slap shot attempt beat Saros to give the Kraken a 1-0 lead.

Seven minutes later, a two-on-one chance from Morgan Geekie was saved by Saros but the puck stayed in the Nashville zone before Borgen's shot from the top of the circles found the back of the net to push the lead to 2-0.

The Predators had chances from Jeremy Lauzon and Nino Neiderreiter clank off the post and stay out as they tried to mount some offense of their own. However, a turnover in the Nashville zone was corralled by Alex Wennberg and dished off to Burakovsky as he maneuvered around a sprawled out Saros to score the third goal of the night for Seattle.

Then just over a minute later, Ryan Donato forced Ryan McDonagh into another turnover that found its way directly to Eberle, who beat Saros high over the glove to give the Kraken a 4-0 advantage.

"I think the last couple games here during our five-game winning streak, we've been having good starts," Burakovsky said. "I think that was a little bit of a problem earlier in the year where we came out a little bit sleeping and we've been talking about it a lot of now I think we were coming ou hot and it sets the tone of the games."

Despite the early big lead, Eberle, Burakovsky and Hakstol all said those games can be difficult to play as it's difficult to keep the same edge with a big cushion.

"We come out, we score four quick ones and a lot of times those games are tough to playing because you know that the other team's going to have a push," Eberle said. "And I mean, you don't want to be lackadaisical, but a lot of times that's what happens. Second period obviously wasn't great, but I liked the way that we changed the momentum in the third and kind of just started to make better plays and forecheck a little bit better and kind of just finished off well."

The Kraken continued their strong run of play on the penalty kill in shutting down both of Nashville's chances with the man advantage. Seattle has now killed off 13 straight penalties during their five-game winning streak. Hakstol pointed to their successful kill late in the second period as being a springboard to level the game back out.

"That kill at that time was a pivotal time of the game," he said. "You give one up there, it's a whole new ballgame going into the last 25 minutes of the hockey game."

Jones came up with a couple big saves in the third period to keep the Predators from clawing into the lead. Brandon Tanev then added an empty net goal with 1:11 left for Seattle.

"We're getting contributions from different guys, different lines," Eberle said. "… "If you have contributions every night throughout (your lines), that's tough to beat. In my mind, that's playoff hockey. That's what gets you far."

Defenseman Jamie Oleksiak left the game with just over two minutes left to play in the second period and did not return. Hakstol didn't have an update on Oleksiak's status after the game.

"I know he wasn't available for the third," he said. "We should have something for you by tomorrow or the next day."

The Kraken have only used their starting six defensemen through their 14 games played this season. Cale Fleury has been scratched for every game the team has played as their seventh defenseman on the roster.

Fleury is a right-handed shot defenseman while Oleksiak shoots left-handed. If he is going to miss some time and Seattle wants to keep a left-handed option in the lineup instead of playing a right-handed shot on their off side, the team may look to call up 2021 second-round pick Ryker Evans from the Coachella Valley Firebirds to fill the role. However, if it would only be a short-term absence, they may just deal with it for the time being.

Seattle's next game is against the Minnesota Wild on Friday night. The Kraken beat the Wild 4-0 last Friday in St. Paul, Minn.