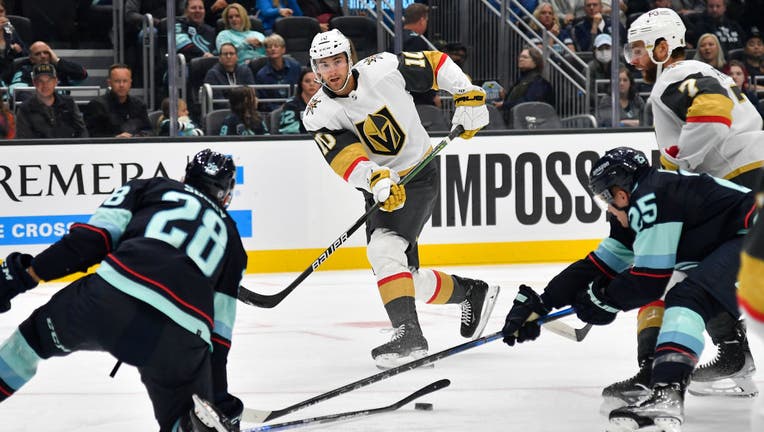 SEATTLE, WASHINGTON - OCTOBER 15: Nicolas Roy #10 of the Vegas Golden Knights passes the puck between Carson Soucy #28 and Karson Kuhlman #25 of the Seattle Kraken during the first period at Climate Pledge Arena on October 15, 2022 in Seattle, Washin

Justin Schultz and Jaden Schwartz scored in the third period for Seattle. Martin Jones had 19 saves through two periods, and Philip Grubauer stopped all five shots he faced in the third.

Kolesar scored just 12 seconds into the game. After the opening faceoff, the puck was on the stick of Seattle defenseman Will Borgen in his own zone. William Carrier took it away from him and got it to Kolesar just beyond the top of the crease for a shot into the lower left for his first of the season.

"That was great turnover by Carrie. Those are ones I missed in the last game in Chicago, and I wasn’t missing it this time," said Kolesar, who played five seasons of junior hockey (2012-17) here with the Seattle Thunderbirds. "This is a good start for us right now."

With Seattle’s Alex Wennberg in the box for high sticking, Alex Pietrangelo sent a pass across the ice from the right faceoff circle to Marchessault, and he sent a slap shot past Jones at 3:07 to make it 2-0.

Smith needed just 8 seconds into a power play to make it 3-0 for Vegas with 6:05 left in the second, sweeping in a pass from Chandler Stephenson for his first.

Marchessault made it 4-0 with 2:49 remaining in the middle period with his third of the season, sending a shallow shot from the right side behind Jones and into the net.

Theodore, a former Thunderbirds teammate of Kolesar, drilled one in from the high slot with 16.5 seconds left in the period for his first and a 5-0 lead.

"I think it’s good for the guys to get a taste of success early – everyone is chasing that early in the year and we don’t want to be behind," Vegas coach Bruce Cassidy said. "I thought we started well tonight, which is something we addressed. I didn’t think our starts in L.A. and at home against Chicago were great. They weren’t bad, but when you can put the other team on their heels, that always helps."

The Kraken avoided a shutout when Schultz scored with 6:41 left in the game for his first. Schwartz, playing in his 600th NHL game, scored his first of the year with 3:43 to go.

"From the start, we were stuck in quicksand for the first 10 minutes of this game – we couldn’t get our feet going," Kraken coach Dave Hakstol said. "Once we steadied our game, we just didn’t execute with the puck. We’re looking at the number of opportunities we gave them in transition right off our tape, whether it was turnovers on entry or slow forechecks, or we just didn’t get there. They killed us on transition, especially in the second period."

The goal at the 12-second mark did not go down as a record for either team. The Vegas record for fastest goal was by William Karlsson just 10 seconds in against Colorado on April 29, 2021, in a 5-2 victory. The fastest goal allowed by Seattle was last Feb. 21 in Vancouver when Tyler Motte scored 11 seconds into the Canucks’ 5-2 win.

NEVER AS EASY AS IT LOOKS

Vegas had a chance to make it 3-0 at the 4:37 mark of the second period when Chandler Stevenson was hooked by Kraken defenseman Vince Dunn and was awarded a penalty shot. However, Jones made a stick save on Stevenson’s wrister.

The Kraken lost their second straight home opener. Their first home game in their inaugural season last year was a 4-2 loss to Vancouver.