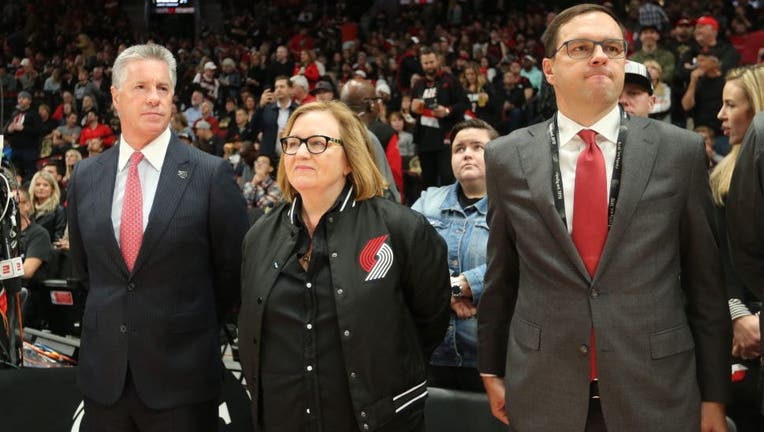 Jody Allen, the sister of late Microsoft co-founder Paul Allen, released a statement on Tuesday saying the Portland Trail Blazers and Seattle Seahawks are not currently for sale amidst speculation into the teams' futures.

Allen has assumed the role of chairperson for both teams in the wake of Paul's death in 2018.

The teams combined to release a statement from Allen on Tuesday after a report from Adrian Wojnarowski of ESPN last week stated that Nike founder Phil Knight and Los Angeles Dodgers part-owner Alan Smolinsky had put in a $2 billion offer to purchase the Trail Blazers.

"As we've stated before, neither of the teams is for sale and there are no sales discussions happening," Allen said in her statement.

"A time will come when that changes given Paul's plans to dedicate the vast majority of his wealth to philanthropy, but estates of this size and complexity can take 10 to 20 years to wind down. There is no pre-ordained timeline by which the teams must be sold."

Paul Allen signed The Giving Pledge in 2010, which vowed to contribute a large portion of Allen's wealth to philanthropic endeavors.

Per The Seattle Times, the Seahawks cannot be sold prior to May 2, 2024 without 10 percent of the gross selling price going to the Public Stadium Authority. It was a provision of Referendum 48, which was passed in 1997 and led to the construction of Lumen Field.

Paul Allen purchased the Seahawks in 1997 for $194 million. The Denver Broncos pending sale price is for $4.65 billion. Assuming the Seahawks have a similar value should they be sold, that means the team has appreciated in value nearly 24 times the original amount in the 25 years since the sale. If Allen waits another decade before finally selling the team, the Seahawks could be worth well over $6 billion by then.

While not the same rate of growth, the Trail Blazers would increase in value sizably as well in the upcoming years.

The statement from Allen does make it clear the teams will be sold off eventually. However, hey do not appear to be on the market right now. Perhaps the right offer does come along to get Allen to change course.

Until then, Allen says she is committed to winning.

"My long-term focus is building championship teams that our communities and proud of," Allen said. "Like my brother Paul, I trust and expect our leaders and coaches to build winning teams that deliver results on and off the court and field."