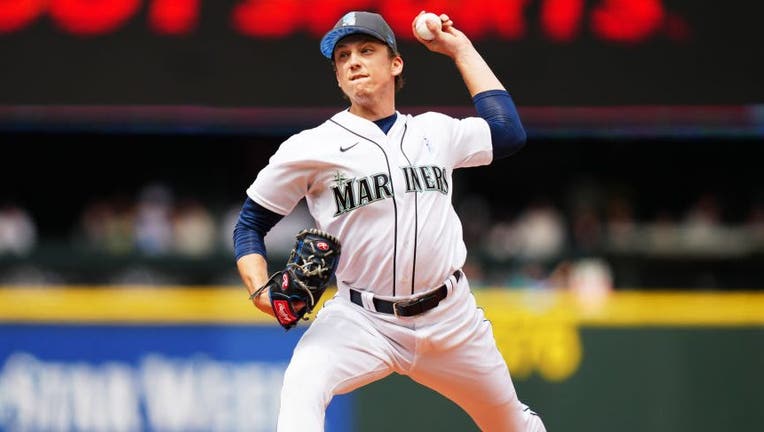 SEATTLE - The Seattle Mariners saw outfielder Jesse Winker and left-handed relief pitcher Ryan Borucki both exit Monday night's game against the New York Yankees. Winker left with back spasms while Borucki was pulled due to a left forearm strain.

Winker left the game in the fifth inning as the team was making a pitching change from starter Logan Gilbert to reliever Penn Murfee. Winker had had two balls hit in his direction in the inning that he was unable to catch.

Winker also took a big swing at a pitch in his first at-bat that manager Scott Servais believed may have contributed to the issue as well.

"I think it's probably something he fired up earlier," Servais said. "He took a pretty good swing at a cutter he missed his first at-bat and he certainly felt it moving around in the outfield.

"[He] looks more like day-to-day. We'll see how he's at tomorrow if that calms down a little bit and react roster-wise based on how he's feeling."

Meanwhile, Borucki was pulled after throwing a pitch to Andrew Benintendi with two outs in the ninth inning. Borucki had surrendered a home run to Aaron Judge and a double to Josh Donaldson while getting outs from Tim Locastro and Gleyber Torres. But after the first pitch to Benintendi, trainers and Servais came out to meet with him on the mount. After throwing one more test pitch, Borucki came out fo the game as Matt Festa finished the night on the mound for Seattle.

"Obviously, it's a left forearm and you're a left-handed pitcher, that's pretty serious," Servais said. "We'll see where that's going to take us. He'll probably get an MRI tomorrow morning and we'll make a determination there on how long he'll be out. But he's going to miss some time for sure.

Borucki is the only left-handed reliever currently on the team's pitching staff. Newly acquired pitcher Matt Boyd and Justus Sheffield are the only other left-handed pitchers on the 40-man roster as possible options for the bullpen. However, Boyd has not pitched yet this season and is set to go out on a rehab assignment shortly after throwing a two-inning simulated game during early batting practice on Monday.

"We'll see. I think everybody would like to have a left-hander," Servais said. "At this point in the year, you want your best 7-8 guys down in the bullpen. Whether it's left or right, you want guys you can go to and our bullpen has been really good. … I feel bad for Ryan. I hope it's nothing serious and he can come back."

If the Mariners wanted to add a left-handed arm to the roster outside the current 40-man group before Boyd or Borucki returns, Brennan Bernardino, Roenis Elias, Nick Margevicius and Fernando Abad are all lefties at Triple-A Tacoma that have MLB experience.

Seattle had some positive injury news before the game on Monday. Julio Rodríguez, Dylan Moore and Diego Castillo are all nearing a return from the injured list. Servais said that all three could be activated as soon as Wednesday. Rodríguez may need a little more time as he was still experiencing some soreness from bat vibrations while trying to hit after taking a pitch off his wrist on July 30.

Winker and Borucki could both end up on the injured list if the injuries are severe enough to miss at least a few games. Those moves would free up spots for the return of Rodríguez, Moore and/or Castillo.