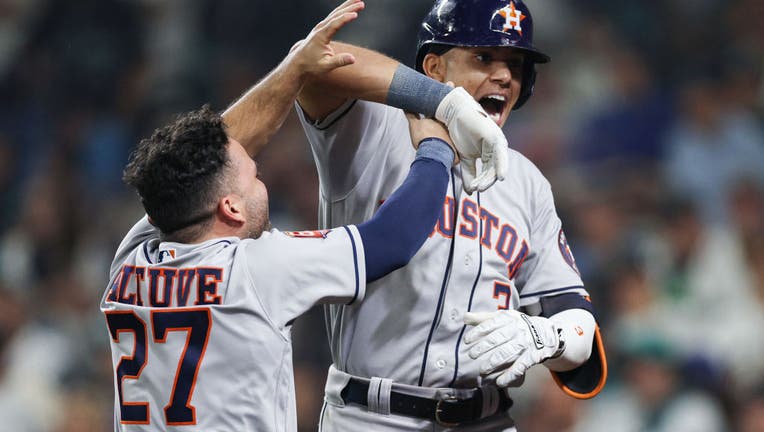 SEATTLE, WASHINGTON - OCTOBER 15: Jeremy Pena #3 of the Houston Astros reacts with Jose Altuve #27 after hitting a solo home run during the eighteenth inning against the Seattle Mariners in game three of the American League Division Series at T-Mobil

SEATTLE - Jeremy Peña hit a solo home run off Penn Murfee in the top of the 18th inning as the Seattle Mariners fell 1-0 to the Houston Astros in a game tied for the longest in MLB postseason history.

The two teams combined to strike out for a MLB playoff record 42 times in the game as the pitching from both teams was sublime. The 17 scoreless innings are also a new MLB record as it surpassed the 15 scoreless innings recorded by the Cleveland Guardians and Tampa Bay Rays in Game 2 of the AL Wildcard series last week.

The victory gave Houston a 3-0 series sweep of the Mariners. The three games were decided by a total of four runs, but Seattle came out on the losing end of all three games.

Murfee was the last typical bullpen arm available in the Seattle bullpen and 10th pitcher into the game for the Mariners. He came through with two big outs in the 16th inning after the Astros got the go-ahead run to third base with two outs. He also worked a clean 17th inning before giving up the home run to Peña.

Mariners fans had been waiting 21 years for this. With 47,690 fans slammed to the rafters of T-Mobile Park ready to explode at a moments notice.

The fans had been in a frenzy all afternoon. The atmosphere ramped up and boiled over as Félix Hernández was announced to throw out the ceremonial first pitch as he entered from center field to the music of Aloe Blacc's "The Man."

It peaked as George Kirby, Matt Brash and Paul Sewald all delivered monumental strikeouts of Houston sluggers as the tension continued to build to a zenith.

The fans were just waiting for the big spark to set the building ablaze in celebration. It was a wait that proved futile as the first home playoff game since 2001 ended in disappointment.

Seattle had chances to end the game on occasions in extra innings. Ty France grounded out to third base with Julio Rodríguez stuck at second base in the 13th inning. Taylor Trammell was left at second as well on an Adam Frazier pop up to shortstop in the 17th.

"They're going on to the LCS for the sixth straight year. We recognize and respect what they do, but we feel like we can play with anybody. And I think we just showed it for three days. If three pitches go a different way, it's an entirely different series," Mariners general manager Jerry Dipoto said.

Outfielder Mitch Haniger is among a group of core veterans that tried to push the clubhouse and front office into wanting and expecting more in previous seasons. Making the playoffs and snapping the playoff drought for the franchise was a major step in the process. But Haniger, who is a free agent after this season, said that there's more to accomplish.

"Fun getting here but ultimately a sour taste not winning the World Series," Haniger said. "Because for me that's the ultimate goal and I know for every guy in our clubhouse that's the ultimate goal. We knew we could get into the playoffs. We knew we could do some things. Unfortunately, the season ended and we're not raising up the World Series trophy. And for us, that's a letdown. We knew we were capable of doing it and unfortunately we didn't get it done."

Added first baseman Ty France: "It sucks we're on this side of it but very proud of this group."

The loss on Saturday was ultimately a waste of a brilliant start from Kirby and 10 scoreless innings for the Seattle bullpen.

Kirby was clearly amped up in the early innings as his fastball hit 97 miles per hour, a good 2-3 miles per hour faster than his average velocity. After a clean first inning, Kirby worked out of an early jam in the second. After issuing a pair of one-out singles to Kyle Tucker and Yuli Gurriel, Kirby struck out Trey Mancini and Chas McCormick to get out of the frame unscathed.

McCullers was equally as dominant for Houston. McCullers allowed just two hits over six innings with two walks and seven strikeouts, three of which came against Rodríguez. Rodríguez struck out each time on McCullers' slider, which was responsible for 10 of Seattle's 12 swings and misses against the Houston starter.

The Mariners staff ultimately allowed just one walk with 22 strikeouts of Houston batters on the night.

"It was a phenomenal game to watch," Dipoto said. "From dominating the zone, missing bats. It was great stuff and it was both sides. They were doing the same thing. I couldn't be prouder of our guys. They did an awesome job."

With two on and two outs in the fourth, Kirby was ruled to have hit Trey Mancini on an inside pitch by home plate umpire Marvin Hudson. On replay, the pitch did not appear to have hit Mancini's body, instead grazing the lower barrel of his bat. However, the call stood after review as the bases went full. Kirby still managed to get McCormick to fly out to center field to end the threat and keep the game scoreless.

Another moment with Hudson occurred on the next at-bat for Seattle. Cal Raleigh believed he had walked on a 3-1 slider from McCullers that appeared inches off the plate. Hudson disagreed and called the pitch a strike to halt Raleigh in his tracks as he'd already tossed him bat to the side to take his base. Raleigh then swung over top a similar slider on the next pitch to strikeout.

Seattle then got some fortune to go their way in the fifth. After a lead-off single from Martin Maldonado, Kirby sawed off José Altuve on a jammed shot that flew directly to France at first base. However, Maldonado had stepped off the base and didn't get back as France applied a quick tag for a stunning double play.

"When I went to catch the ball, my arm basically landed on him. Then I noticed he was off the base so I just slapped the tag on him," France said. "Talking to the umpire, he did say because he bumped me it would have been interference, but because I made the catch, there's no interference call and it was a double play."

Houston put Kirby in one last pickle in the seventh inning. Gurriel and McCormick each singled to put traffic on the bases. Kirby got pinch-hitter Christian Vázquez to fly out to left field and added one final strikeout of José Altuve to finish his outing on a high.

"I thought our pitching was just off the chart, starting with George Kirby," Servais said. "To fire him out in a must-win game and you get seven shutout innings out of a rookie against that club, you can't ask for any more. I thought he was outstanding, commanded, was in total control."

Andrés Muñoz delivered three strikeouts against the heart of the Houston lineup in the eighth inning around a two-out double from Alex Bregman. Kyle Tucker chased a 101 mph fastball upstairs from Muñoz for the final out of the inning.

Rodríguez hit a laser off reliever Rafael Montero for a double with two outs in the bottom of the eighth that came just feet from cleaning the fence in left. Montero managed to strike out France to keep Seattle scoreless.

Diego Castillo allowed a leadoff single to Gurriel and then hit pinch-hitter Aledmys Diaz to put two runners on with no outs. After a McCormick sacrifice bunt moved the runners up, Servais then asked another rookie in Matt Brash to bail them out of the pickle.

And boy, did he deliver.

After pumping a 99 mph fastball by Vázquez, he came back and struck him out on a slider for the second out. Brash then got Altuve, the 2017 AL MVP, to swing over three sliders for another strikeout as T-Mobile Park erupted in roars.

Eugenio Suárez singled to lead off the ninth for the Mariners. After a Cal Raleigh fielder's choice, Ryan Pressly hit Mitch Haniger to put the winning run in scoring position. But Pressley struck out Carlos Santana in a full count and got Adam Frazier to send the game to extra innings.

It was the first extra inning playoff game for Seattle since Game 1 of the ALDS against the Chicago White Sox. The Mariners won that game 7-4 in ten innings as Edgar Martínez and John Olerud homered off Keith Foulke in the extra frame.

Brash came back for the 10th and mowed down the heart of the Houston order, including a strikeout of Bregman to set the table for the offense again to have a chance to win. Abreu then sat Seattle down in order as well.

After a quick 11th, the game forged into new territory for the Mariners. The only prior postseason home game in team history to go 11 innings resulted in Martínez's walk-off double against the New York Yankees in Game 5 of the ALDS in 1995.

Rodríguez drew a two-out walk off Hunter Brown in the 13th inning and stole second base to give the Mariners their best chance since the ninth inning. France then grounded out to third base as another chance slipped by.

Meanwhile, the Astros couldn't get anything going against Seattle's bullpen. the Mariners allowed just one baserunner in six innings on Sewald's hit-by-pitch of McCormick.

Bregman singled off Matthew Boyd with one out and Tucker walked – the first walk issued in 16 innings of pitching by Seattle – to put massive pressure on Seattle.

Penn Murfee, yet another rookie, came out of the bullpen to pitch as the bullpen had exhausted nearly all of its arms. Rodríguez tracked down a fly from Gurriel deep in the right-center field gap with a sliding grab to keep Bregman from scoring and pick up a key out. Murfee then got Diaz to pop out to first base to further extend the marathon and keep the game scoreless.

"We kept putting the zero up there and kept putting the zero up there and you think we're going to be able to break through because we have so many times," Servais said. "It's kind of what we're accustomed to, playing those tight games and finding a way. But there was no errors made in that game today. I mean, that is a big league game, with the pitching and defense that was fired out there. We just weren't able to put anything together.

"And, again, nothing for lack of effort. You got give the other team a lot of credit. They pitched great. They played a great series. They beat us."

After Peña's home run, Luis Garcia got Jarred Kelenic to ground out to first base, J.P. Crawford to shortop and Rodríguez to fly out to center field to bring an end to the Mariners season.

– The game tied three other games for longest in MLB postseason history.

– Catcher Cal Raleigh said he has ligament damage and broken bone in his injured left thumb. Raleigh managed to catch all 18 innings of Saturday's season finale with the injury. He's seeing a specialist in the coming days.