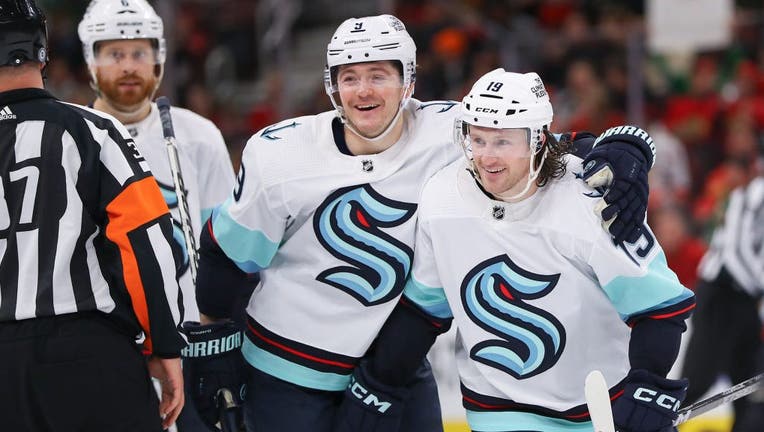 CHICAGO, IL - JANUARY 14: Seattle Kraken Winger Jared McCann (19) is greets by Seattle Kraken Center Ryan Donato (9) after scoring a goal during a game between the Seattle Kraken and the Chicago Blackhawks on January 14, 2023 at the United Center in

CHICAGO - Jared McCann had his first career hat trick and the Seattle Kraken beat the Chicago Blackhawks 8-5 on Saturday night for their franchise-record eighth straight victory.

McCann scored twice in a five-goal flurry in a 3:41 span of the first period.

All-star rookie Matty Beniers and Oliver Bjorkstrand each had a goal and an assist and the Kraken won their seventh straight on the road to become the first NHL team to sweep a trip of seven or more games.

"Being able to score in a game like this is just huge," McCann said. "And obviously we made some history tonight, so was nice."

Seattle improved to 26-12-4, a win short of its total last season when it joined the NHL as an expansion franchise. Ryan Donato, Alex Wennberg and Yanni Gourde each had two assists.

Coach Dave Hakstol stopped short of saying his team is ahead of schedule. But he likes what sees so far in Seattle’s second season.

"It’s a great accomplishment for the players to be able to do that," Hakstol said. "It shows the consistency and work they’ve put in from the start of this road trip."

The sharp-shooting McCann, who leads the Kraken with 22 goals, has been a big part of Seattle’s surge.

"He just continues to find the back of the net and provide real good two-way play," Hakstol said. "He has a natural scoring ability, an elite ability there. We saw that tonight."

"We didn’t have the best year last year, especially on the road," McCann said "We’ve added some new faces and made our team a lot deeper."

The game was tied 1-all midway in the first when the Kraken surged ahead with five goals on six shots against last-place Chicago.

Beniers started the onslaught with his 17th goal, through a screen at 9:30. McCann and Burakovksy connected on prime chances 1:22 part to make it 4-1 and prompt Chicago coach Luke Richardson replace goalie Petr Mrazek with Alex Stalock.

In alone, Tolvanen beat Stalock just 37 seconds later. McCann completed the spree at 13:11, firing a shot from the right circle between Stalock’s pads.

The Kraken started their eight-game run with a home win over the New York Islanders on New Year’s Day, then topped Edmonton, Toronto, Ottawa, Montreal, Buffalo and Boston before capping the trip with the drubbing of Chicago.

With the win, the Kraken became the first team in NHL history to sweep a seven-game road trip, per NHL Public Relations. Seven different teams had previously held the record with six-game road sweeps.

Seattle and goalie Martin Jones blanked Boston 3-0 on Thursday, handing the Bruins their first home regulation loss this season. In this one, Jones made 22 saves for his seventh straight victory.

The Kraken had a seven-game winning streak earlier this season, from Nov. 17 to Dec. 1.

"Now you just have to put your work ethic back on and get right back at it," Richardson said. "I assume that this is unacceptable for them (Chicago players) as well and they’ll be ready to work on Monday."

Kane returned after missing three games with a lower-body injury.

Mrazek stopped just one of five shots. Stalock blocked 21 of 25 shots and heard derisive cheers from the crowd on routine saves once he settled in.

With Kane back, the Blackhawks returned top prospect Lukas Reichel to Rockford of the AHL. During his three-game recall, the 20-year-old German forward scored his first NHL goal and had two assists.

Reichel, drafted 17th overall in 2020, made a bigger impact that in four previous short stints with Chicago over the past two seasons. Still the Blackhawks want him to hone his skills and consistency by playing a lot of minutes in the minors.

"There’s a few things that he still needs to improve on," coach Luke Richardson said, while pointing to Reichel’s defensive zone play.