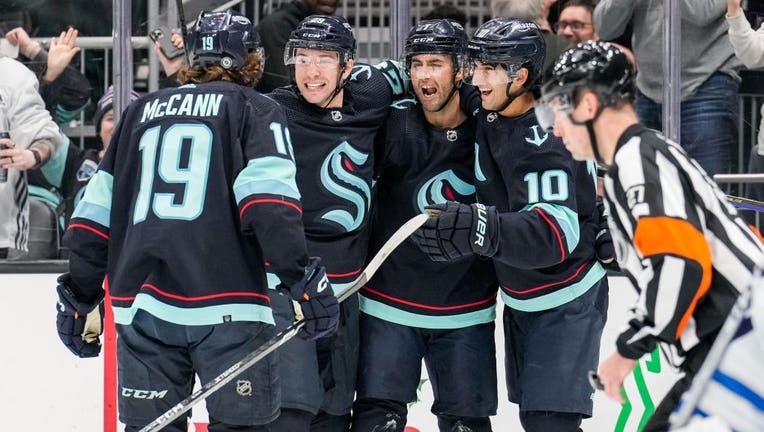 SEATTLE, WASHINGTON - DECEMBER 18: Jared McCann #19, Vince Dunn #29, Jordan Eberle #7 and Matty Beniers #10 of the Seattle Kraken celebrate a goal by Eberle during the second period of a game against the Winnipeg Jets at Climate Pledge Arena on Decem

SEATTLE - Jared McCann's goal with 4:32 left to play lifted the Seattle Kraken to a 3-2 victory over the Winnipeg Jets on Sunday evening.

Unlike the last meeting between the two teams just over a month ago, the Kraken were able to close out a one-goal lead against the Jets as they improved to 17-10-3 on the season.

Justin Schultz – back in the lineup after a two-game absence for an upper body injury – won a puck battle along the boards that spit the puck free to McCann in the right circle. McCann spun a fired a shot over the left shoulder of goaltender David Rittich to carry Seattle to the win.

"Just a bit more grit," McCann said of the effort. "I feel like we kind of lost that the last couple of games here. We haven't played with that jam, that kind of relentlessness. I feel like we had that tonight. It was good."

A month ago, Seattle was nursing a 2-1 lead in the closing minute with Rittich pulled for an extra attacker. Carson Soucy got called for punching Pierre-Luc Dubois in the back of the head and Blake Wheeler scored with four seconds left to send the game to overtime, where Winnipeg promptly won 54 seconds in on a goal from Mark Scheifele.

This time, the Kraken kept Rittich from even heading to the bench until 50 seconds were left as they kept control of play. The Jets were unable to get a single chance on net after McCann's goal. They only had two shots in total in the third period with their last shot of the game coming via Kyle Connor with 14:06 left to play.

Winnipeg was 13-0-0 entering Sunday's game in contests they led after two periods.

Both of Winnipeg's goals came on the power play. Outside of that, the Kraken thoroughly dominated the contest throughout the night. The Kraken out-shot Winnipeg by a 34-17 margin. The Jets only had two shots on net in total in the third period with their last shot of the game coming via Kyle Connor with 14:06 left to play.

"They got some weapons over there with Connor and Scheifele," McCann said. "Guys that can really put the puck in the back net. Grubi [Philipp Grubauer] made some big saves for us tonight, obviously."

McCann's goal gave Seattle its only lead of the night as Winnipeg took advantage of Kraken penalties to jump out front.

Former Kraken forward Karson Kuhlman won the puck off of Vince Dunn and forced the Seattle defenseman into a holding penalty that gave the Jets a power play.

A short-handed chance at one end for Morgan Geekie and Brandon Tanev turned into a 4-on-1 chance the opposite way for Winnipeg with Grubauer coming up with one of his 15 saves on the night. However, Adam Larsson took a high-sticking penalty that gave the Jets a 5-on-3 chance that they quickly converted. Mark Scheifele redirected a hard slap pass from Josh Morrissey by Grubauer to make it a 1-0 game.

A brilliant backhand goal from Jordan Eberle evened the game at 1-1 just shy of nine minutes into the second period. Eberle took a cross-ice pass from Larsson in the left circle with Kuhlman bearing down in defense only to spin and fire over the right shoulder of David Rittich to get Seattle on the board.

"It was disgusting," Ryan Donato said of Eberle's goal.

It was reminiscent of a goal Eberle scored last season for Seattle. From the right circle, Eberle delivered a similar spinning backhand finish to beat Igor Shesterkin of the New York Rangers.

"That's a great play by Ebs. The ability to make that play... and just the confidence to do it," Hakstol said.

The Kraken continued to control even strength play throughout much of the second period. However, another power play goal put the Jets back on top. A holding the stick penalty on Will Borgen give Winnipeg the advantage. Dubois hammered in a rebound off Grubauer off a shot from Connor to restore the Jets lead.

Seattle evened the game again just 16 seconds into the third period. Ryan Donato deflected a long distance wrist shot from Yanni Gourde by Rittich to make it a 2-2 game. It's the third straight game with a goal for Donato as he also scored in losses to the Tampa Bay Lightning and Carolina Hurricanes.

"I look at the third period, 2-1, first shift, we had to be better getting to net front. Well, we got there," Hakstol said. "We shot a puck and Donato got there for a tip. We had two at the net and then the game winner is just off a line change, a good neutral zone play and getting the puck deep and that reload and getting that puck back allows Jared McCann to make just a world-class shot."

– Defenseman Gustav Olofsson was reassigned to AHL Coachella Valley with Justin Schultz back from a two-game absence for an upper body injury and Jamie Oleksiak back from a three-game suspension for an illegal check to the head of Washington's Alexander Alexeyev.