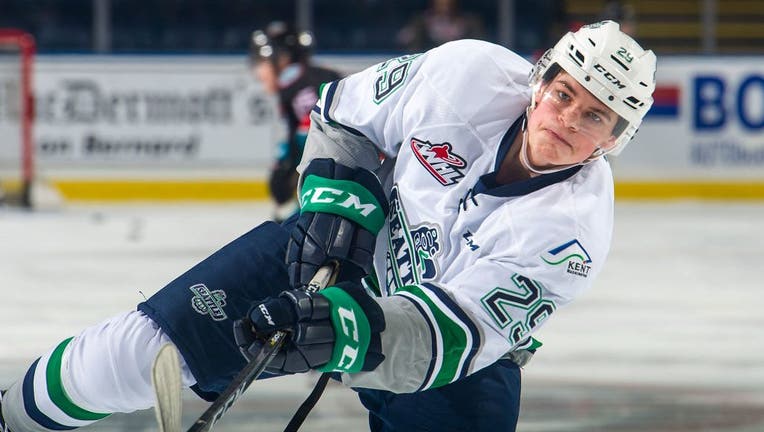 KELOWNA, BC - OCTOBER 10: Jared Davidson #29 of the Seattle Thunderbirds takes a shot during warm up against the Kelowna Rockets at Prospera Place on October 10, 2018 in Kelowna, Canada. (Photo by Marissa Baecker/Getty Images)

Jared Davidson scored a pair of goals and Henrik Rybinski added a third as the Seattle Thunderbirds earned a trip to the WHL Championship Series with a 3-2 victory over the Kamloops Blazers in Game 7 on Tuesday night.

Davidson – the team's leading scorer this season with 42 goals and 89 total points in 64 regular season games – scored the first two goals for the night for Seattle to dig out of an early 1-0 deficit. Rybinski's goal late in the second period gave the Thunderbirds the needed cushion to hold on for the Western Conference Championship Series crown.

The Thunderbirds will face the Edmonton Oil Kings in the championship series, which will begin in Edmonton on Friday night. The Oil Kings advanced with a 4-1 series victory over the Winnipeg Ice in the Eastern Conference Championship Series.

Lukas Svejkovsky assisted on all three goals for Seattle on the night. Thomas Milic had 33 saves on 35 shots in the winning effort.

It's the Thunderbirds' third trip to the championship series in the last seven seasons. Seattle lost four games to one against the Brandon Wheat Kings in 2015-16, but returned to the title series the next season and earned their first championship with a 4-2 series victory over the Regina Pats.

Seattle also reached the championship series in 1996-97, losing the series 4-0 to the Lethbridge Hurricanes.

The Blazers took the lead less than 10 minutes into the game as Connor Levis dug a puck out of the corner to a waiting Fraser Minten for the opening tally.

Davidson answered with a power play goal with 4:13 left in the opening period. Rybinski won an offensive zone face-off that came to defenseman Kevin Korchinski. After a shot fake, Korchinski passed to Svejkovsky, who found Davidson cross-ice for a one-timer and the tying goal.

Early in the second period, Kamloops was unable to clear their own zone as Svejkovsky corralled the puck and again found Davidson on the right wing for a shot that beat Dylan Garand for the goal and a 2-1 lead.

Then with 5:04 left in the second period, Davidson won an offensive zone face-off that came to Svejkovsky. He sent the puck to Jeremy Hanzel for a one-timer that was deflected in front of the net by Rybinski to extend the lead to 3-1.

Kamloops managed to get a goal back to cut the deficit to 3-2 with just six seconds left to play in the game. However, it was too little, too late for a rally as Seattle held on to advance to the championship.

Seattle will get only two games at home in the championship series. Game 3 and 4 will be the accesso ShoWare Center in Kent on June 7 and June 8 with 7:05 p.m. puck drops. However, due to scheduling conflicts, the Thunderbirds would play as the home team in Game 6 in Edmonton if the series goes that far.