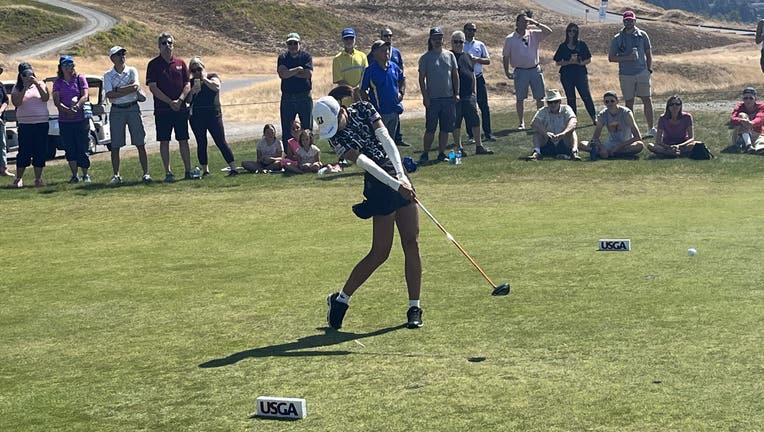 Japan's Saki Baba tees off on the first hole at Chambers Bay Golf Course in her quarterfinals matchup with Lauren Lehigh of the University of Mexico in the U.S. Women's Amateur on August 12, 2022. (photo by Curtis Crabtree / FOX 13 Seattle)

Baba cruised to a 7-and-6 victory over 17-year-old USC commit Bailey Shoemaker to punch her ticket into the final. Baba, the top-ranked player to reach the quarterfinals at 45th in the world, was 4-under through the 12 holes needed to defeat Shoemaker.

Meanwhile, Chun survived another slugfest match against Ireland native and UCLA senior Annabel Wilson for a 2-and-1 triumph. She survived a difficult back-and-forth match with USC junior Brianna Narvarossa in the quarterfinals that went 19 holes to advance to Saturday's semifinal.

Baba has been dominant over the last two days to advance to the final match. Baba birdied the final four holes of the front nine to race out to a 4-up lead over University of New Mexico senior Lauren Lehigh on, which included a chip-in birdie on the par 4 7th. Baba then delivered an exclamation point with a hole-out from 120 yards away for eagle on the short par-4 12th hole that gave her a 5-up lead with six holes left to play en route to a 4-and-3 victory.

Baba birdied the first hole to jump out to a quick lead and kept making pars as Shoemaker struggled to match. Baba was four up after six holes by playing steady and making pars. Baba then started making birdies to put the hammer down. Birdies at the 7th, 9th, 10th and 12th put the match away with just a single dropped hole on the par 5 8th.

Wilson had not trailed in any of her first four matches in match play before dropping the first hole in her match with Chun on Saturday. After Wilson won the second, Chun's birdie on the par 4 5th put her back ahead. A brilliant tee shot on the par 9th to inside five feet led to another birdie to give Chun a 2-up lead at the turn.

Wilson answered back with a birdie on the 10th to trim the lead to 1-up before Wilson's bogey on the par 5 13th pushed the advantage back to 2-up with five to play.

Chun opened the door by flying into the pot bunker protecting the left side of the par 3 15th hole only for Wilson to follow her directly into the same trap. Both players would bogey as Chun maintained the 2-up advantage.

After pars each on the 16th, Wilson stuck a shot to four feet on the par 3 17th that gave her a chance to extend the match. However, Wilson's birdie putt slid by on the left and Chun made par to earn her spot in the final.

Chun won the Canadian Women's Amateur last month at Westmount Golf and Country Club in Kitchener, Ontario in a two-shot victory over Alissa Xu. That victory got her into the field this week for the U.S. Women's Amateur as well as the upcoming Canadian Women's Open later this month. Chun also won medalist honors in the Big Ten Championship last spring in leading the team to the conference title.

Baba's victory over Shoemaker is the largest margin of victory in a semifinal since Annika Sorenstam in 1992. Baba is the first player from Japan to reach the semifinals since Michiko Hattori in 1988. Hattori won the 1985 U.S. Women's Amateur and is the only Japanese champion.

Both Baba and Chun earn spots into the 2023 U.S. Open at Pebble Beach. All eight quarterfinalists are exempt into next year's U.S. Women's Amateur at Bel-Air Country Club in Los Angeles.