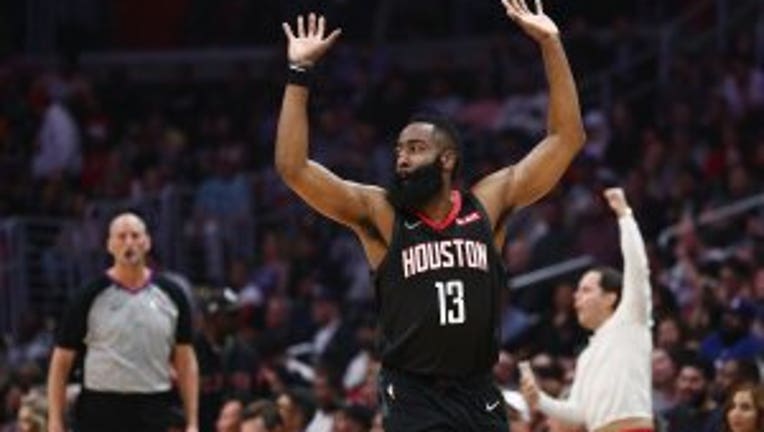 SAN ANTONIO (AP) — James Harden had a slam dunk waved off by officials, the first sign that it might not be the Houston Rockets’ night.

Lonnie Walker IV helped make sure of that.

Walker had a career-high 28 points and the San Antonio Spurs overcame Harden’s 50 points by rallying from a late 10-point deficit to beat Houston 135-133 in double overtime Tuesday.

Harden played a season-high 49 minutes coming off a 60-point outing Saturday over three quarters against Atlanta, but he was whistled for two charges in the second overtime. The second came against DeMar DeRozan with 0.8 seconds remaining, sealing San Antonio’s victory.

That followed a bizarre moment in the fourth quarter, when officials erased Harden’s dunk with 7:53 remaining and Houston leading 102-89. Officials ruled the ball didn’t clear the cylinder, but crew chief James Capers said after the game that, “in fact it did clear the net and should have been a successful field goal.”

Capers said the Rockets did not ask for a review within the 30-second window that coaches can challenge calls, during which time they were arguing and asking for clarification. The botched call crushed Houston’s momentum.

“We just stopped playing and they gained confidence,” Harden said.

The Rockets led by 22 in the second half and were up by double digits in the fourth quarter for all but the final 4:18.

Walker, a second-year guard who has been patiently waiting on the bench most of his career, took over in his first extended playing time to fuel the comeback.

“It was confidence,” Walker said. “My teammates kept me going, and once I started feeling it, I’m just going to let it go and play my game. I know what I can and cannot do. I’m just happy that we played team ball and we got this win.”

“They played faster but more sense of urgency than we did, especially being up,” Houston point guard Russell Westbrook said.

Harden had six points in the second overtime, including a follow of Clint Capela’s missed free throw with 1:41 remaining to put Houston up 131-128. Bryn Forbes tied it at 131 with a 3-pointer, and the teams traded free throws the remainder of the game.

In addition to drawing the late charge on Harden, DeRozan was also 3 for 4 on free throws in the final 30 seconds.

“That’s who he is, he’s the leader of the team,” Walker said. “We expect him to score in crunch time and make big plays and that’s exactly what he did. He got us this win.”

Capela had 22 points and 21 rebounds, and Austin Rivers and Westbrook added 19 points apiece for Houston. Westbrook was 7-of-30 shooting but added 10 assists and 10 rebounds.

The Spurs were without starting power forward LaMarcus Aldridge, who missed his second straight game with a sore right thigh.

San Antonio responded with a group effort to beat the Rockets four days after knocking off the Los Angeles Clippers at home.

“This is a team that we think we have, we’ve just got to play like this consistently and we haven’t really done that,” San Antonio coach Gregg Popovich said. “So, hopefully, we’re starting to figure that out.”

Houston outscored San Antonio 7-2 in the final two minutes of overtime to force a second OT. Harden’s runner bounded off the backboard and rim as the first overtime ended.

Walker had 18 points in the fourth quarter, including eight straight to close the period and force overtime. Walker’s run started with an alley-oop dunk followed by consecutive 3-pointers to tie it at 115-all with 11.5 seconds remaining.

“He is the most athletic player on this team,” DeRozan said. “He can do some things a lot of us can’t. He was just going out there playing with his will and ability and he got it going.”

Rockets: Harden remained in the game after tweaking his left ankle and tumbling to the court with 5:26 remaining. Capela appeared to step on Harden trying to save the ball. Harden rose slowly and jogged gingerly upcourt but played all but the final 2:27 of the first quarter. ... Danuel House sat out with an undisclosed illness.

Spurs: Walker’s previous career highs were 16 points against Denver on April 3 and 26 minutes against Golden State on Feb. 6. He played 35 minutes Tuesday. ... Forbes had 25 points before fouling out with 48.5 seconds remaining the second overtime.

Rockets: At Toronto on Thursday night.