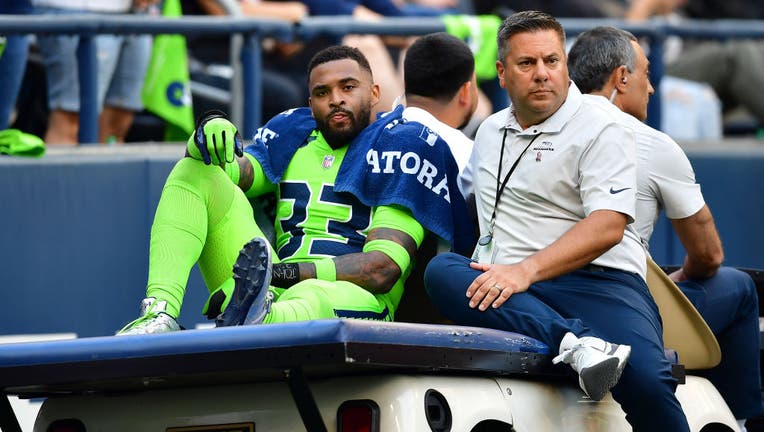 SEATTLE, WASHINGTON - SEPTEMBER 12: Jamal Adams #33 of the Seattle Seahawks is carted off the field during the second quarter against the Denver Broncos at Lumen Field on September 12, 2022 in Seattle, Washington. (Photo by Jane Gershovich/Getty Imag

Adams was injured while nearing sacking Broncos quarterback Russell Wilson on a third-and-12 from the Denver 45-yard line. Adams blitzed from a linebacker alignment and slipped off Wilson as Wilson threw the ball away for an incompletion.

"He hurt his knee tonight," head coach Pete Carroll said. "Not a typical knee injury. His quadriceps tendon, I think, got damaged some tonight. He got hurt. So it's a serious injury."

Adams was replaced at strong safety by Josh Jones for the remainder of the game.

Adams had surgery to repair a torn labrum in his shoulder this offseason and to fuse two fingers in his hand. One of those fingers re-broke in the first practice of training camp as well and forced him to get a follow-up evaluation. Adams was set to play through that injury again as he had done the last two seasons.

"It sucks the way it happened and it sucks for him personally because I know how much work he put in this past offseason and I know mentally he was in great space," free safety Quandre Diggs said. "He was the most comfortable he's been around here. It just sucks to see man."