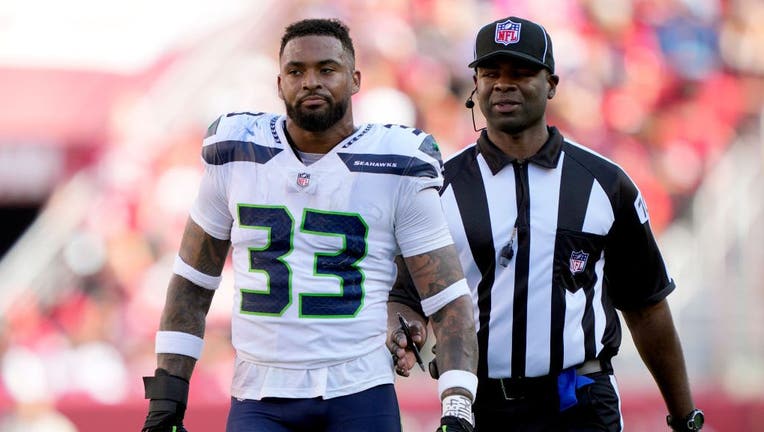 SANTA CLARA, CALIFORNIA - OCTOBER 03: Jamal Adams #33 of the Seattle Seahawks on the field during the second half against the San Francisco 49ers at Levi's Stadium on October 03, 2021 in Santa Clara, California. (Photo by Thearon W. Henderson/Getty I

RENTON, Wash. - Seattle Seahawks safety Jamal Adams was absent from training camp on Thursday as he is seeking some follow-up opinions on his surgically repaired fingers.

"Yesterday, his hand just wasn’t right and so he’s getting some opinions about it," head coach Pete Carroll said after practice. "So we’ll see what that means. I don’t know right now. I don’t have anything to advance today other than us exchanging conversation last night. But he’s looking into some stuff and he’s trying to get things figured out."

Adams had surgery this offseason to address a torn labrum in his shoulder and two fingers on his left hand that would regularly become dislocated over the last two seasons. Adams was optimistic earlier this offseason that the surgeries had put the injuries behind him.

"I had to get both of my fingers fused, so I’ve been dealing with that for two years. I haven’t really been saying anything about it, but it is what it is," Adams said in June.

"My first year when I got here, I dislocated my ring finger probably about ten times and the other one probably about twelve times, so I’ve been dealing with that. I haven’t really said much, let everybody talk about it, whatever, but it’s good now and they are in trouble."

Carroll said he wasn't sure how much time Adams was going to be away from the team while figuring out how to move forward.

"He just felt something," Carroll said. "It didn’t feel right. So we’ve just got to get it checked out. He’s really concerned. He’s really upset that he has to miss anything. But we jumped right at the chance to take care of it and see what’s going on right now."

Adams has played in 12 games each of the last two years since joining Seattle in a trade prior to the start of the 2020 season. He's dealt with shoulder injuries both years that required surgery after the season. While he set a record with 9.5 sacks by a defensive back in his first year with the Seahawks, Adams' deficiencies have shown at times as well, particularly as a coverage player. He did intercept two passes last season, which set a new career-high.

With both Adams and Quandre Diggs back at practice on Wednesday – Diggs sustained a broken leg in the final game of last season – Carroll spoke about his excitement for the safety duo being back to health.

"He’s really pumped about it, he feels great, he had a really profitable offseason, and he’s really raring to go," Carroll said of Adams. "His mind is in a great spot. To come back with Quandre (Diggs) back there, those two guys really solidify what we are all about back there and take the leadership for our club. He’s really excited about it, he’s ready for the moment, so let’s just put together a good day after day, after day, and build on it and make sure that he has a great camp. Same with Quandre and the rest of the fellas, but I know that he really wants that to happen. He’s really excited about being here and being on point throughout."

That optimism lasted less than 24 hours before Adams departed to address ongoing issues with his fingers.

Adams signed a four-year extension with the Seahawks prior to last season. It is set to begin this year after playing out the final season of his rookie deal.