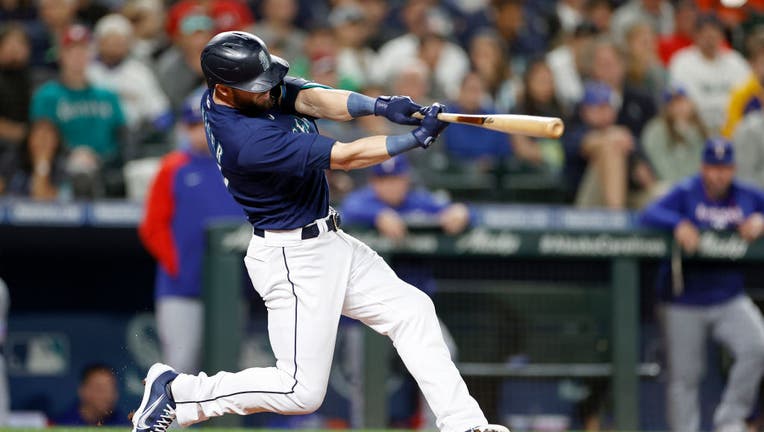 SEATTLE, WASHINGTON - SEPTEMBER 29: J.P. Crawford #3 and Mitch Haniger #17 of the Seattle Mariners his a two-run home run during the third inning against the Texas Rangers at T-Mobile Park on September 29, 2022 in Seattle, Washington. (Photo by Steph

SEATTLE - The Seattle Mariners are truly on the precipice of breaking a 21-year playoff drought.

Luis Torrens singled to drive in Jarred Kelenic to tie the game in the 11th inning and J.P. Crawford's RBI single off the glove of third baseman Josh Jung allowed Dylan Moore to score from third as the Mariners earned a 10-9 victory over the Texas Rangers on Thursday night.

Mitch Haniger and Jarred Kelenic each homered twice and Chris Flexen picked up the victory in relief for Seattle. The win sets the stage for Friday as the Mariners can clinch a playoff spot for the first time since the 2001 season.

"The goal is to win the World Series. It's not just to end the drought. We will end the drought tomorrow. We're going to. And it's a beautiful thing. And then it's on to the next goal and this team's got a lot of high goals," manager Scott Servais said.

A Mariners victory or a loss from the Baltimore Orioles against the New York Yankees will put Seattle in the postseason for the first time in over two decades. The Mariners have the longest postseason drought of any team in the "Big Four" North American sports.

"I mean, every game is big, but we know that if we win tomorrow night, we get to celebrate. And I'm pretty excited and have been waiting a long time for that," Haniger said.

The Orioles play the Yankees at 4:05 p.m. PT on Friday. Seattle could know they're in the playoffs before the first pitch is even thrown in their game against Oakland.

Haniger, Crawford and Marco Gonzales are among the veteran Mariners that have taken ownership of wanting to be the group to finally end the drought. Haniger and Gonzales have been with Seattle since 2017. Crawford since 2019. They're some of the longest-tenured Mariners and they know the history behind the drought. They came close to ending the streak last year only to fall just shy of a playoff berth.

"I've been thinking about this moment," Gonzales said. "We're on the cusp. The job's not finished. We've put a target on our back. The way we've been playing baseball and the energy that we bring, we're getting everybody's best right now. So be in this situation, to be in the driver's seat with X amount of games to play, it feels good. To be thinking about this moment for the past five-something years I've been here, it's really special."

Now the Mariners are finally on the doorstep of returning to the postseason and being the group that ends it.

"I've been waiting for it for four years. I can't wait," Crawford said.

"We're hungry. It's what we've been wanting to do since the first day of spring training. We all know what's at stake and tomorrow's going to be fun."

Haniger homered in each of his first two at-bats on the night for Seattle. His two-run bomb to center field in the first inning traveled 442 feet to give the Mariners a 2-0 lead. It's the longest home run of the season at T-Mobile Park.

Haniger has been on a cold streak at the plate over the last month. The first inning homer was the first for Haniger since August 25 against the Cleveland Guardians. In the 24 games since, Haniger was batting just .183 with four doubles, 10 walks and nine RBI with 31 strikeouts before breaking out against Texas.

Gonzales allowed three home runs to the Rangers in the third inning as Texas grabbed the lead back. Sam Huff led off the inning with a solo home run to get the Rangers on the board. After a single from Josh H. Smith, Marcus Semien delivered a two-run blast to give Texas a 3-2 lead. Adolis Garcia added with a solo shot to push the lead to 4-2 before Gonzales worked out of the inning.

Gonzales allowed four runs on six hits with a walk and four strikeouts over five innings of work for Seattle on the night.

Haniger punched back with his second two-run homer of the night in the bottom half of the inning to ring the game level again at 4-4.

Kelenic then put the Mariners back on top with an opposite field two-run home run into the Rangers' bullpen to make it a 6-4 game. It was an impressive homer from Kelenic as he stayed on a 94-mph fastball at the top of the zone to drive to left field.

His solo home run in the sixth inning was also a step forward for Kelenic as he took left-hander Brock Burke deep to right field to give Seattle a 7-4 lead. It was Kelenic's first home run off a lefty this year in the majors and he'd entered the game batting just .132 against southpaws.

"He's got some kind of talent," Servais said of Kelenic. "You don't see left-handed hitters go out of this ballpark the other way too often. I mean he smoked that ball. And I was probably more excited with the homer off the lefty. He got a high fastball there and turned it around.

"It felt good," Kelenic added. "It felt better winning this thing, especially in extra innings. We battled from pitch number one. That was the more exciting part to me."

The Mariners bullpen couldn't maintain the advantage, however. Semien and Nathaniel Lowe hit back-to-back solo homers off Paul Sewald in the seventh inning to trim the lead to 7-6. Andrés Muñoz got out of the seventh inning jam for Sewald, but his streak of 11 appearances without a run allowed would come to an end in the eighth. Bubba Thompson and Sam Huff each singled to put runners on the corners with no outs. A double play groundout from Kevin Plawecki was enough to get Thompson home and even the game at 7-7.

The Rangers took an 8-7 lead in the 10th inning as Garcia, the ghost runner at second base, scored on a one-out single from Kole Calhoun off Erik Swanson. Seattle would answer in their half of the inning. Eugenio Suárez singled to move pinch-runner Sam Haggerty to third. A sacrifice fly from Cal Raleigh drove home Haggerty to level the score at 8-8. Kelenic had a chance to end the game with Abraham Toro, pinch-running for Suárez, 90 feet from victory. But Kelenic would pop-out to third to send it to the 11th inning.

A sacrifice bunt from Smith and a sacrifice fly from Semien scored Plawecki to again put Texas ahead, 9-8, in the top half of the inning.

But the Mariners again rallied in the bottom half to get the victory and puts Seattle in a win-and-in situation at worst for Friday.

"I know it will probably be tough to fall asleep tonight, but definitely be excited for tomorrow," Haniger said.

The Mariners are now a half game ahead of the Tampa Bay Rays for the fifth-seed in the playoffs after the Rays lost to the Boston Red Sox on Thursday. They're also just two games behind the Toronto Blue Jays for the top spot in the Wild Card standings. If Seattle can somehow run down Toronto for the four-seed, they would host in the Wild Card round against the fifth-seeded team. If not, they would have to go on the road.

The Blue Jays face the Red Sox and Orioles over their final six games. Meanwhile, Seattle plays the A's and the Detroit Tigers over their final seven games. Oakland (56-100) is the worst team in the American League while Detroit (63-92) is the third worst.