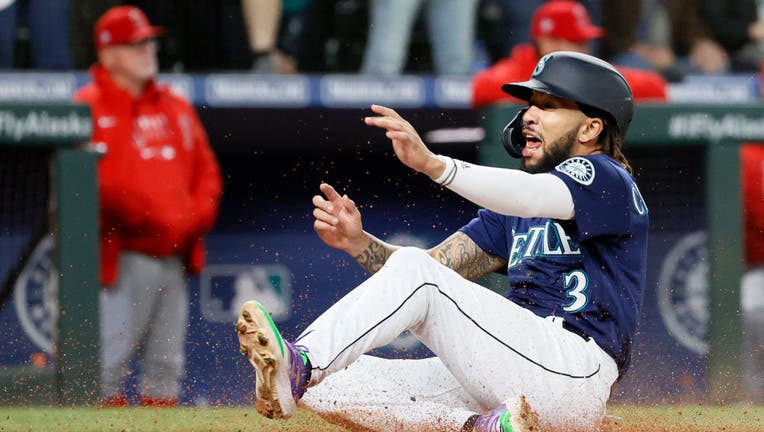 SEATTLE, WASHINGTON - OCTOBER 02: J.P. Crawford #3 of the Seattle Mariners reacts after scoring on a single by Mitch Haniger #17 during the eighth inning against the Los Angeles Angels at T-Mobile Park on October 02, 2021 in Seattle, Washington. (Pho

The Seattle Mariners announced they have signed shortstop J.P. Crawford to a new five-year contract ahead of Friday's season opener against the Minnesota Twins.

The new deal overrides the contract he'd signed to avoid salary arbitration for the 2022 season and carries through the 2026 season. Via Jeff Passan of ESPN.com, the new deal is worth $51 million.

"This is a fun way to kick off our season," general manager Jerry Dipoto told reporters in Minneapolis. "I mentioned what an integral part J.P. has become here on the field, in the clubhouse, in our community. It's something we've been working on for a little while now and to be able to bring it home before we start our season is just a great way to start

Crawford, 27, hit .273 last season for the Mariners with 89 runs scored, 37 doubles, nine home runs, and 54 RBI. After winning a Gold Glove in 2020, Crawford was a finalist for the award again last season as he's developed into one of the best defensive shortstops in baseball.

"I love Seattle," Crawford said. "I've loved it ever since I put on the jersey for the first time. I really wanted to stay here ever since then, and so I'm really happy for this opportunity."

The Mariners acquired Crawford and infielder Carlos Santana from the Philadelphia Phillies in trade in Dec. 2018. Seattle sent pitchers Juan Nicasio and James Pazos, and shortstop Jean Segura. Crawford, a former first-round pick of the Phillies in 2018, had stalled out in the Philadelphia organization and the trade to Seattle served to revitalize his career.

"Being traded was the best thing that ever happened to me," Crawford said.

Crawford credited former Mariner Dee Strange-Gordon for helping him claw out of "a dark place" he felt he was in with his baseball career.

"He took me under his wing and showed me how to really love baseball again," Crawford said. "He showed me the passion for it again. He just taught me how to have fun again out there and reminded me that it's just baseball. You've been doing it since you were 7-8 years old, so to go out there and have fun. This is the big leagues so don't take anything for granted."

In three seasons in Seattle, Crawford has hit .256 with 18 home runs, 65 doubles, 124 RBI and 165runs scored. Along with Marco Gonzales and Mitch Haniger, Crawford has been among the team's most vocal advocates and has pushed for the team to raise its expectations. Crawford hopes to carry the Mariners back into the playoffs and beyond.

"I don't know if we have a more competitive player," Dipoto said. "And when the stakes rise, he has a knack for kind of rising with it. And that was never more apparent than toward the end of last season."