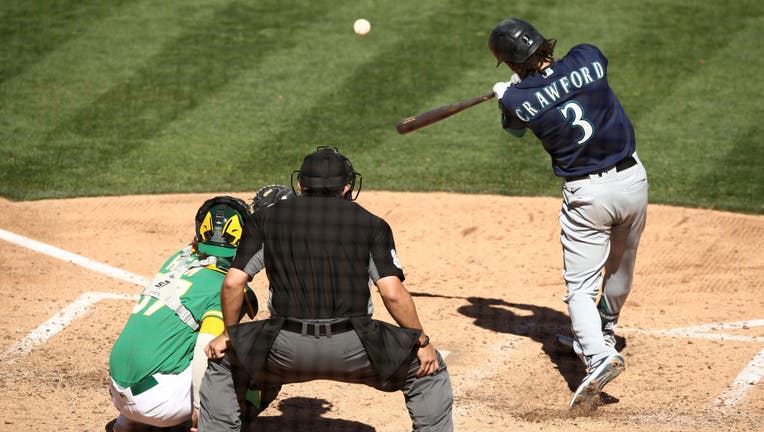 OAKLAND, CALIFORNIA - SEPTEMBER 26: J.P. Crawford #3 of the Seattle Mariners hits a single that scored a run against the Oakland Athletics in the sixth inning of game one of their double header at RingCentral Coliseum on September 26, 2020 in Oakland

OAKLAND, Calif. - The Oakland Athletics would like to be swinging better in late September with the playoffs fast approaching.

J.P. Crawford hit a go-ahead single in the eighth inning after his tying single in the sixth, and the Seattle Mariners beat the A’s 5-1 in extra innings Saturday in the first game of a doubleheader.

Kyle Seager added a two-run homer in the eighth for the Mariners, who bounced back from a tough loss a night earlier.

“That was great to be able to go out in a high-leverage situation, especially this whole month, and to be able to do that with some added Adrenalin,” Graveman said.

Khris Davis hit a sacrifice fly in the fourth inning, but that was it for the A’s, whose hitting is hardly where they would hope.

“It was the situational at-bats that cost us today. That’s really what did it,” A’s manager Bob Melvin said. “I thought early on there was a lot of energy, good at-bats.”

The typically slugging AL West champion A’s (35-23), who will host a best-of-three wild-card series starting Tuesday at the Coliseum, are still struggling as an offense but doing just enough. They won 3-1 in 10 innings Friday night on Mark Canha’s two-run homer.

Liam Hendriks (3-1) pitched a perfect seventh before finding trouble in the eighth, when Ty France also singled home an insurance run for Seattle.

“Heck of a comeback,” Mariners manager Scott Servais said. “I can’t say enough about the effort and the grind. We have some grit.”

Seattle was the home team for Game 2, a makeup from a Sept. 3 postponement following a positive coronavirus test result by A’s right-hander Daniel Mengden on Aug. 29 in Houston.

Oakland starter Mike Minor struck out seven over five innings but still has just one win since joining the A’s — against Seattle on Sept. 14.

Mariners starter Justus Sheffield allowed one run on five hits over five innings with two walks and a strikeout after winning his previous two starts.

The A’s played their fifth doubleheader overall, fourth in a 19-day span and their second twinbill in 13 days against the Mariners after another on Sept. 14 in Seattle.

Oakland has played its most doubleheaders since also having five in 1986.

The Mariners added RHP Seth Frankoff as their 29th player for the doubleheader.