SEATTLE -- Over the next few days, all 32 NFL teams will be drafting from the comforts of their own homes, hardly an ideal situation, but necessary as the country responds to a global pandemic.

"When I picture my parents trying to work their computer, that’s what I picture" with the virtual draft, says FOX Analyst Joel Klatt.

"Here’s the deal, football guys don’t care about technology. They just don’t. They’re not troubleshooters. If a click doesn’t work, they yell for the IT guy. The IT guys are going to be the unsung heroes in all of this, and who knows where they’re actually going to be," Klatt told Q13 Sports.

"It's exciting," he says. "This really is a competition, and we’re up against trying to figure this thing out. I think that’s one of the really extraordinary parts … trying to create the best avenues that will allow us to free flow and react the way we normally do … it’s ironing out and getting all the kinks out of the way and making sure we have backup systems."

With seven overall picks, Carroll and GM John Schneider have never completed a draft in Seattle without taking at least eight players, so expect more maneuvering this year. 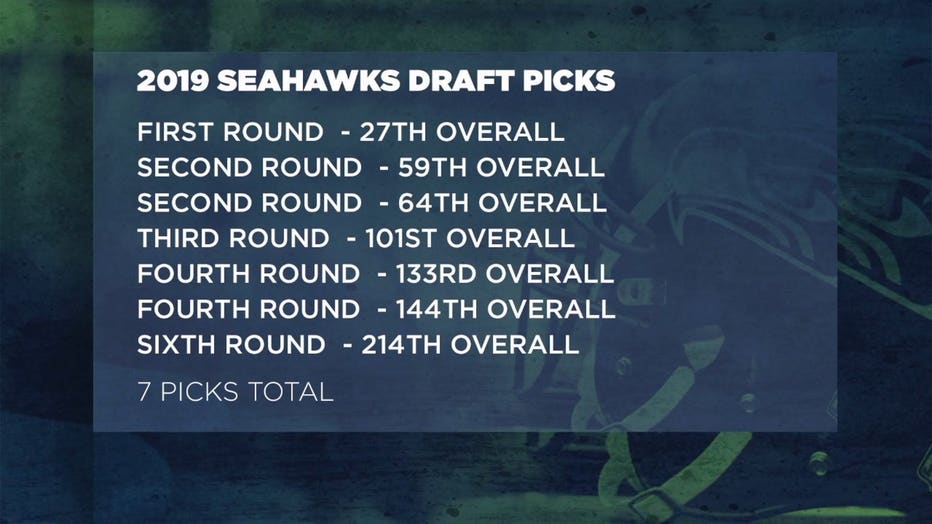 And if the Seahawks don’t trade down, and if he’s still on the board, both analysts we spoke to -- Joel Klatt and Rob Rang -- said to remember the name Yetur Gross-Matos, a defensive end from Penn State.

Gross-Matos is one of 58 prospects who will take part remotely in the draft.

The players received video kits from the NFL that will record their reactions to being selected, whether is it is during the first round on Thursday, second or third rounds on Friday, or during the remaining four rounds on Saturday.

The kits sent to prospects include two cellphones, two light stands, a pair of tripods, a headset for interviews and a microphone. One of the phone cameras will be on the entire time until the player is selected while the other will be used for interviews with ESPN/NFL Network, Commissioner Roger Goodell and the teams that pick them.

The package also includes hats from all 32 teams, so the players can put on the right one after they’re selected.

What viewers will see during the draft required building out a massive technical infrastructure over just a few weeks. Some of it already existed because of the amount of video transmitted during games, but this is more extensive because of the more than 100 feeds coming in from prospects, general managers, coaches and fans. Three call centers have been set up to serve as the main point of communication before they are transferred to the ESPN/NFL Network production center in Bristol, Connecticut, to be interviewed.

No one can ever really predict what the Seahawks will do in any draft. This year, given the unprecedented situation, as a Seahawks fan you can pretty much expect the status quo.

In essence, expect the unexpected.