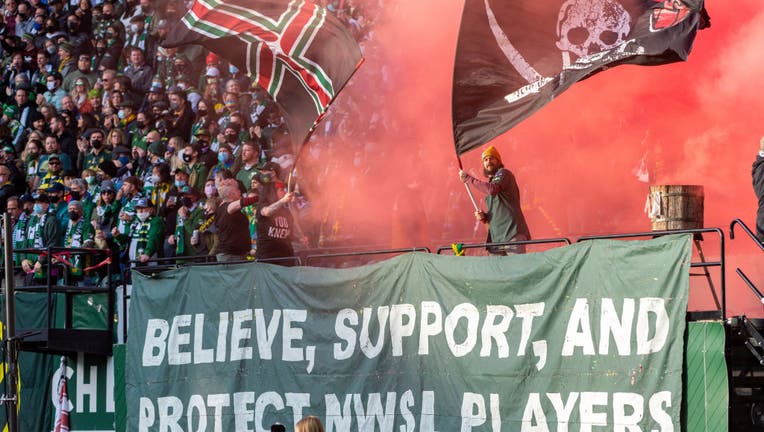 Portland Timbers fans set off red smoke in support of the NWSL womens soccer palyers as their ongoing protest over the sexual harrassment scandal by former Portland Thorns coach, Paul Riley, at during the Portland Timbers game Minnesota United first

An investigation commissioned by the National Women’s Soccer League and its players union found "widespread misconduct" directed at players dating back to the beginnings nearly a decade ago of the league.

A report detailing the results of the year-long investigation was published Wednesday, a little over two months after the release in October of a report on a separate investigation by former acting U.S. Attorney General Sally Q. Yates that found emotional abuse and sexual misconduct were systemic in the sport, impacting multiple teams, coaches and players.

"They used derogatory and insulting language towards players, displayed insensitivity toward players’ mental health, and engaged in retaliation against players who attempted to report or did report concerns," the report said.

"This report clearly reflects how our league systemically failed to protect our players. On behalf of the Board and the league, let me first and foremost sincerely apologize to our players for those failures and missteps. They deserve, at a minimum, a safe and secure environment to participate at the highest level in a sport they love, and they have my unwavering commitment that delivering that change will remain a priority each and every day," NWSL Commissioner Jessica Berman said in a news release.

Riley, who has denied the allegations, was fired by the North Carolina Courage in the aftermath. He was among five head coaches in the league who were either fired or resigned in 2021 amid claims of misconduct.

The fallout has continued into this year. Portland Thorns owner Merritt Paulson announced on Dec. 1 that he was putting the team up for sale amid calls for him to do so that began after the Yates report detailed how the Thorns mishandled complaints about Riley when he coached the team in 2014-15. Paulson stepped down from a decision-making role with the team in October and two Thorns executives were fired.

The investigative team for the joint investigation reached out to 780 current and former players, all 12 NWSL teams and 90 current and former club staff, and those from the league office. More than 200 documents were reviewed during the probe, which was conducted by the law firms of Covington & Burling and Weil, Gotshal & Manges.

"This report speaks to the power of the players, the power of the truth and the power of a strong labor union," Meghann Burke, executive director of the NWSL Players Association, said during a video conference that also included Berman. "Players have willed this moment into existence. The NWSL Players Association would like to thank, honor and acknowledge every player, whether known or unknown, identified or not, in this report, for speaking truth to power. Players who have lent their names to this report know that kind of courage is hard to understand."

Two coaches, James Clarkson of the Houston Dash and Amanda Cromwell of the Orlando Pride, were suspended earlier this year at the recommendation of investigators. Cromwell was subsequently fired.

The report said an ingrained culture contributed to players’ unwillingness to come forward, including fears about the instability of the league and job security, the expectation of gratitude and acquiescence, sexism and gender bias, and a lack of confidence in the league’s response.

"The individual incidents and recurrent practices detailed in this report reflect the experiences of players, not only in isolated moments but also more broadly, as women playing soccer in a league historically owned and run by men," it said.

Contributing factors included a lack of background checks or similar vetting for coaches, no clear direction from the league front office for handling misconduct allegations, and insufficient staff at both the club and league level for addressing complaints.

The investigation offered recommendations to "ensure that players and staff within the league and its clubs feel safe and confident in reporting misconduct."

The report also calls for guidelines addressing appropriate interactions between players and club staff, including a responsible drinking policy; to establish guidelines addressing appropriate locations for one-on-one meetings between team staff and players; consider establishing guidelines regarding socializing between players; provide written guidance to coaches and other team staff stating it’s inappropriate to make degrading comments or jokes about a player’s weight; and require coaches to adhere to club medical staffs’ decisions regarding player health and ability to train and play.

Berman said officials need time to analyze the report but she expects meaningful reforms will be in place for next season.

OL Reign said on its website that the club was "taking the next steps toward action by first acknowledging failures outlined in the report that allowed for misconduct to occur."

See the full report from the NWSL and NWSLPA Joint Investigative Team: