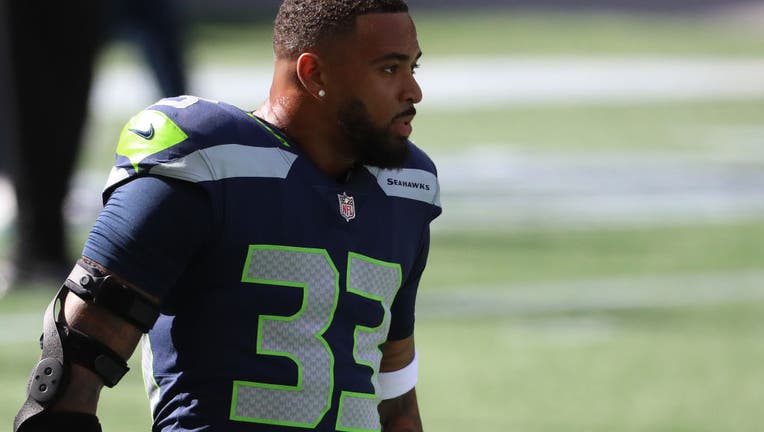 SEATTLE, WASHINGTON - SEPTEMBER 27: Jamal Adams #33 of the Seattle Seahawks looks on before their game against the Dallas Cowboys at CenturyLink Field on September 27, 2020 in Seattle, Washington. (Photo by Abbie Parr/Getty Images)

RENTON, Wash. - The Seattle Seahawks will be without starting safety Jamal Adams and starting cornerback Quinton Dunbar for Sunday’s game at Miami, leaving an already thin secondary even more vulnerable.

Running back Carlos Hyde was listed as inactive Sunday.

Seattle ruled Adams out due to a groin injury suffered last Sunday against Dallas. Dunbar will miss his second straight game due to a knee injury that developed after Seattle’s Week 2 victory over New England.

Tre Flowers will start his second straight game in place of Dunbar, but it’s not clear who will step in for Adams. Lano Hill is listed as the backup at strong safety but he was out of last week’s game due to a back injury and is listed as questionable against the Dolphins. Hill did not practice either Thursday or Friday.

Coach Pete Carroll acknowledged the team may consider resting Adams and Dunbar again next week depending on where they are in their recovery with the Seahawks having their bye in Week 6.

“It’s part of our thinking knowing that the bye is coming up, and so it depends on how the guys are,” Carroll said Friday. “We’re not going to bring them up until they’re ready, but there’s an opportunity if a guy just barely at the end of the week, he’s just making it back, that taking that extra week could be worthwhile.”

Also out this week is rookie linebacker Jordyn Brooks, who suffered a sprained knee in his first start last week.

The Seahawks also get better news. Running back Chris Carson and cornerback Shaquill Griffin should be able to play. Carson suffered a sprained knee when his legs were twisted by Dallas defensive linemen Trysten Hill late in last week’s win. Carson was a full participant in practice Friday.

Griffin was limited in practice this week with a shoulder injury but should be able to play. Carroll said the same goes for running back guard Damien Lewis (ankle).

Seattle made one roster move before leaving for Miami, signing linebacker/defensive end Shaquem Griffin to the roster. Seattle had an open spot on its 53-man roster.

Griffin was added from the practice squad before last week’s game against Dallas and played well in the fourth quarter.