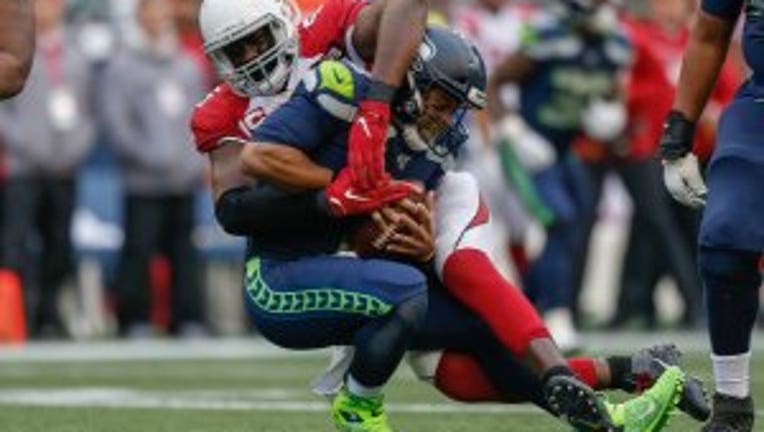 Quarterback Russell Wilson #3 of the Seattle Seahawks is sacked by linebacker Chandler Jones #55 of the Arizona Cardinals in the second quarter at CenturyLink Field on December 22, 2019 in Seattle, Washington. (Photo by Otto Greule Jr/Getty Images)

SEATTLE – A week before the regular-season finale, nothing seemed to go right for the Seattle Seahawks as the team was hammered by the Arizona Cardinals 27-13.

After a quick three-and-out from Arizona, Seattle advanced the ball at will thanks to running back Chris Carson. It set Russell Wilson up for the short touchdown connection to Nick Bellore, but things quickly turned against Seattle’s favor from there.

The Seahawks defense, reeling from injury and a suspension to tackle Al Woods, immediately gave up an 80-yard touchdown run to Kenyan Drake.

The two teams traded possessions with neither being able to score after the fierce opening exchange. The Cards smothered Wilson, with four sacks and denying any third-down conversions.

Kyler Murray opened the floodgates for the Cardinals and never looked back, finding Larry Fitzgerald on a 21-yard touchdown and setting up Zane Gonzalez for a field goal that extended Arizona’s lead to 10 at the half.

Seattle’s woes continued with a fumble that allowed an early field goal for Arizona to begin the second half. A blocked Arizona field goal attempt was picked up by Marquise Blair who ran it all the way to the 10 but was only converted for a field goal.

The Seahawks tried to capitalize while Arizona backup QB Brett Hundley filled in for Murray as he nursed a hamstring injury on the sidelines.

A 51-yard field goal from Jason Myers revitalized Seattle after cutting the deficit to one score. But Hundley proved more than serviceable and put Drake in an easy position for a touchdown.

Desperation throws from Wilson couldn’t be answered, and Arizona ran the clock.

Running backs Chris Carson and C.J. Prosise were both injured during the first half and did not return.

During the game, Wilson surpassed Matt Hasselbeck for most passing yards in team history.

Seattle will host the 49ers for a crucial regular-season finale Sunday, December 29, 2019.