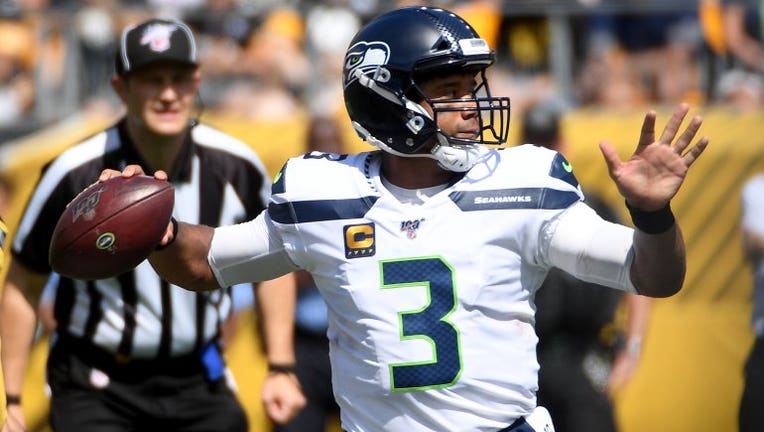 SEATTLE - Russell Wilson is tired of getting hit. Tired of taking sacks.

His frustration is to the point that Wilson took time on Tuesday which was set aside to speak on winning the Walter Payton Man of the Year award to address some of the issues he sees with the Seattle Seahawks going into the offseason.

At the top of Wilson’s list seems to be concerns with how he’s been protected, and the fact through nine years he’s taken 394 sacks in the regular season.

Wilson’s comments came after days of conjecture that followed Seattle’s star quarterback being honored by the league with its top award for work done off the field. Wilson was presented the award last weekend at the Super Bowl in Tampa, becoming the second Seahawks player to be honored, joining Steve Largent.

But while his work off the field has been noteworthy, it was on the field concerns with the Seahawks that steered the conversation. Wilson noted his frustration with being at the Super Bowl and not playing. Seattle last reached the Super Bowl in February 2015 and hasn’t advanced past the divisional round of the playoffs since.

In 2020, the Seahawks won the NFC West but were knocked out of the playoffs in the first round by the Los Angeles Rams.

"I love the process of winning. That’s why I put my cleats on every day. That’s why I get up early in the morning every morning, and that’s all I care about is winning and finding a way to win and do whatever it takes," Wilson said. "And that’s part of what you want your story to be about, and when I hang up my cleats is, you know, I have always said this and this hasn’t changed, I’ve always wanted to be one of the greatest winners of all time. So part of that process is I think everybody be on the same page and communicating and working together."

Wilson’s primary concern seems to be his protection. The 394 times sacked in the regular season are the most for any QB in his first nine seasons dating back to 1970, according to Pro Football Reference.

Seattle has made an investment in the offensive line a priority at times during Wilson’s career, although results have been inconsistent. Last season, Seattle signed right tackle Brandon Shell and drafted rookie Damien Lewis, both of whom had solid first seasons with the Seahawks.

How much that’ll change under Seattle’s new offensive coordinator Shane Waldron is one of the big questions for the offseason. Wilson was involved in the discussions that led to Waldron’s hiring, replacing Brian Schottenheimer after he was fired following three seasons with the Seahawks.

"You can tell he just kind of has that it factor. ... I think he’s gonna be a great offensive coordinator," Wilson said. "He’s got everything that you would want in terms of his knowledge of the game and his experience."

Wilson winning the Walter Payton Man of the Year Award included a $250,000 donation from the NFL to the Why Not You Foundation he started with his wife Ciara. In 2020, the couple donated one million meals to Feeding America and Food Lifeline, and contributed about $1.75 million to rebrand an existing charter school and launch the first Why Not You Academy set to open later this year.

Wilson also continued visiting with patients at Seattle Children’s Hospital, although they were virtual experiences due to the COVID-19 pandemic.

Wilson said the idea of philanthropy was instilled by his parents. He noted his mom, Tammy, a nurse, had quietly helped with COVID-19 testing in the past year at some Seattle area hospitals.

"As a young child you sit there and you notice your parents and what they do and how they love and how they guide and how they lead," Wilson said. "I think that was something that really affected my heart, my soul when I was young. That’s something I always wanted to do."