SEATTLE - Q13 sports anchor Michelle Ludtka had the chance to sit down with Sounders coach Brian Schmetzer for an exclusive interview ahead of Sunday's MLS Cup.

Ludtka: There's no questioning that you believe in this organization and this group of players and what they're capable of and after the win against LA FC. That kind of the national media kind of pegged you as the underdog did that do anything to this group - adding an extra chip on their shoulder.

Schmetzer: I think the narrative was there already within the players as far as LA FC vs. Sounders. The narrative about myself and my coaching, you know, we can push that aside a little bit because I got a lot of help. But the players felt in the atmosphere in the locker room prior to that LA FC game was some of the most intense stuff that I'd ever seen. I mean, everybody was laser-focused - dialed in. And I think Michelle, there was some of that, yeah, LA FC was the best team all year. You know, I had said in another interview that what Bob accomplished and what LA FC and Atlanta the year before, it’s driving the level of our sport higher and higher. Not just in the coaching ranks, but also on the field of play. And so, my guys were ready to take on LA FC, and it was a challenge. And they were up for the fight, and they proved that they could do it. 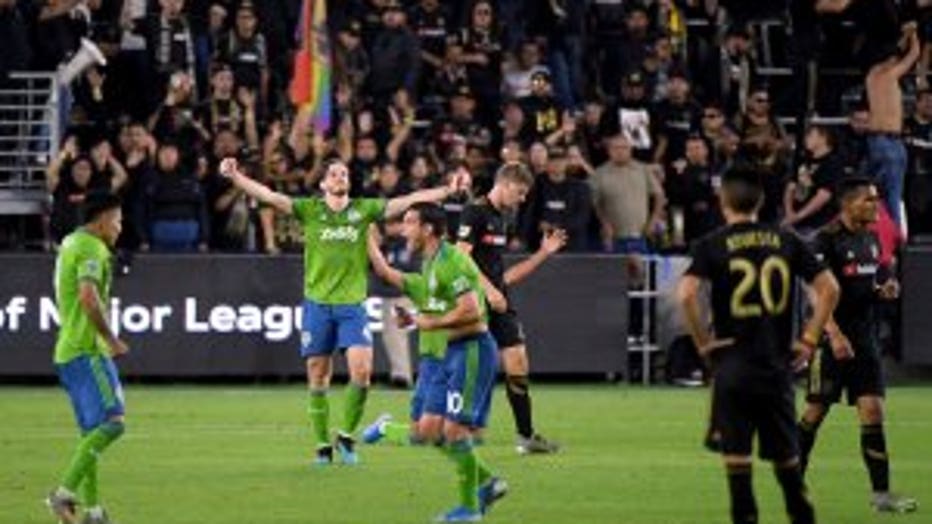 Gustav Svensson #4 of Seattle Sounders celebrates a 3-1 win next to Walker Zimmerman #25 of Los Angeles FC during the Western Conference finals at Banc of California Stadium on October 29, 2019 in Los Angeles, California. (Photo by Harry How/Getty Im

Ludtka: Do you think that will linger at all into the actual Cup Championship against a Toronto team that you've seen already this season? Or do you think it's a reset period, and they'll find a different way to find that motivation and that spark?

Schmetzer: I think any player would tell you, any pro soccer player, any guy that plays in a World Series or NBA Finals or something that this is the game. I mean, it's Game Seven. It's a one-game play. I mean, it's a Super Bowl. My job as a motivator for this for that group of guys. I don't do much, they’re ready.

Ludtka: Against LA FC, you guys switch stuff up, you ask different things of your players playing in a different style of play. That might not have been what the players specifically would have wanted to do for them individually, but it was really what was best overall for the group and you. What does that say about this team's commitment to each other as a whole? And that big goal of winning this championship?

Schmetzer: I'm so glad you asked that because, you know, this specific little tweaks within our overall game plan. Some guys did have to sacrifice little bits of their game to help out against Carlos Villa, against their attacking movements, how they play, why they play the way they do, and certainly they were at home with a ton of confidence. So, it was really great to see Raul , see Jordan , Nico [Lodeiro] always, but everybody just sacrificing and knowing, ‘Okay, on this area, the field This is where I need to be. Because maybe in a different game, I might be over here but this game, I have to be here,’ and they did it. They executed the game plan to a tee and ended up causing us to win the game.

Tune in to JoeTV on Sunday for pregame coverage and postgame reaction.