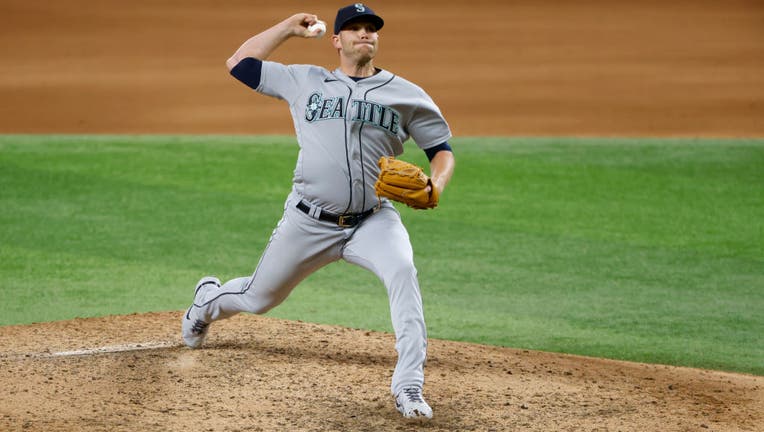 ARLINGTON, TX - JULY 31: Casey Sadler #65 of the Seattle Mariners pitches against the Texas Rangers during the eighth inning at Globe Life Field on July 31, 2021 in Arlington, Texas. (Photo by Ron Jenkins/Getty Images)

ARLINGTON, Texas - Switch-hitting Jonah Heim hit his second two-run homer of the game in the bottom of the 10th inning to give the Texas Rangers a 5-4 win over the Seattle Mariners on Saturday night.

Heim, who homered from both sides of the plate, launched his left-handed shot in the 10th off Diego Castillo (2-5), who was acquired Thursday from Tampa Bay and hadn’t given up a run in his previous 11 outings.

"I asked (Rangers manager Chris Woodward) if I should bunt or hit a homer," said Heim, a 25-year-old rookie acquired from Oakland in February for veteran shortstop Elvis Andrus. "He said he wouldn’t be mad if I hit a homer."

Spencer Patton (1-1) earned the win after giving up the tying run in the ninth inning and the then-go-ahead run in the 10th.

J.P. Crawford singled to score Tom Murphy from second in the 10th in Texas’ first save situation after closer Ian Kennedy was traded to Philadelphia in a multi-player deal on Friday afternoon. Ty France led off the Mariners’ ninth with a homer.

Heim led off for Texas in the 10th with Andy Ibanez on second. It was Heim’s first walk-off homer and first multi-homer game in the major leagues. He also homered in Friday’s 8-5 loss to the M’s.

"Made a mistake — one pitch got us," said manager Scott Servais, whose Mariners lost for only the second time in 12 extra-inning games. "That happens."

Heim hit a homer from the right side in the fifth inning off Tyler Anderson to tie the score 2-2. Nathaniel Lowe gave Texas a 3-2 lead in the sixth with an opposite-field single to left off Anderson, scoring Adolis Garcia, who doubled with a shot that struck the left-field chalk behind third base.

Kyle Seager gave Seattle a 2-0 lead four batters into the game with a two-run homer off Taylor Hearn after what appeared to be an inning-ending double play on a one-out grounder to third base by France. But second baseman Ibanez took his right foot off the bag before catching the throw from Charlie Culberson and relaying to first base, keeping the inning alive with Mitch Haniger at second. Seager then hit a 2-2 slider into the right-field seats.

Hearn was removed after retiring the first two batters in the fourth after 52 pitches, two over his career high, in his fourth career start.

Lowe’s hit ended the day for Anderson, who made his Seattle debut after being acquired Wednesday from Pittsburgh. Anderson allowed three runs on six hits and no walks.

The scheduled promotion for Saturday’s game, a Joey Gallo bobblehead celebrating his 2020 Gold Glove in right field, went on despite him being traded early Thursday. A Rangers spokesman noted that fans had possibly bought tickets with the promotion in mind and also said the bobblehead recognized a team milestone, even if the player honored was no longer with the club.

Garcia made only his fifth start of the season in right field, and made a leaping catch to rob France of an extra-base hit in the sixth inning.

It was eventful night in left field for Seattle’s Dylan Moore. After jogging in to make a routine catch on Texas’ opening batter, he tripped, fell forward and was compelled to tip his cap to his applauding teammates in the dugout. In the sixth, Moore made a leaping catch running into the wall and a throw that led to doubling Lowe off first base.

Rangers RHP Mike Foltynewicz (2-10, 6.11) has allowed the most homers in the majors (31) and has the third-worst opponents’ batting average among big-league qualifiers (.281). His ERA in four July starts was 10.42.