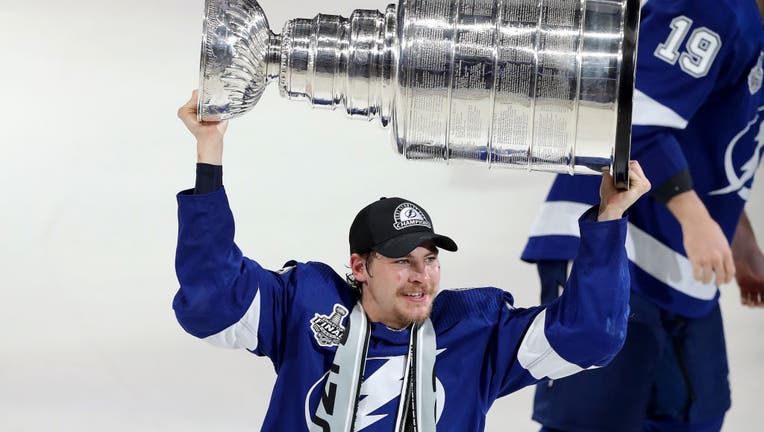 TAMPA, FLORIDA - JULY 07: Yanni Gourde #37 of the Tampa Bay Lightning celebrates with the Stanley Cup after the 1-0 victory against the Montreal Canadiens in Game Five to win the 2021 NHL Stanley Cup Final at Amalie Arena on July 07, 2021 in Tampa, F

SEATTLE - After winning two straight Stanley Cup titles, Yanni Gourde has one of the more impressive resumes among the players selected by the Seattle Kraken in the NHL expansion draft.

But instead of being one of Seattle’s top forwards to start the team’s first season, Gourde is going to be stuck as a spectator when the puck finally drops after undergoing surgery to repair a torn labrum in his left shoulder.

"It’s been a complicated situation because it’s been bugging me for over 18 months. There’s a lot of stuff in that left shoulder that didn’t work right and everything was caused by the labrum tear," Gourde said Tuesday. "We kind of found that out when I went to see the doctor for surgery and that’s what came out of it."

Seattle was fully aware of Gourde’s surgery when it selected the talented forward in the expansion draft. The Kraken see Gourde as one of their top centers as he comes off Tampa Bay’s run to another title, a year during which he had 17 goals in the regular season and another six in the playoffs. He’s tied to Seattle through the 2024-25 season.

But the news of the surgery put a damper on the excitement. Gourde said he’s been told recovery should be four months, which on the optimistic end would cause him to miss about six weeks of the regular season.

It’s already going to be a challenge for the Kraken to pull together an entirely new roster and get them ready in about a month for the first game in franchise history. Gourde understands it may take a little time to fully find his role when he’s finally ready to go in late November or early December.

"I don’t want to put pressure on myself," Gourde said. "As soon as I’m ready, I’ll be ready. I’ll be skating with the boys. I’ll be battling. Like I said, my priority is to help this team win. Wherever I fit into the lineup that’s where I’m going to go and I’m going to try to work as hard as I can do to help my team win."

While Seattle appears strong on the blue line and in goal, up front has seemed a little lackluster. With Gourde missing the first stretch of the season, Seattle’s likely center options include Alexander Wennberg, Jared McCann, Colin Blackwell and Calle Järnkrok.

Gourde said his first impression of the Kraken roster is that it’s a "hard-working group."

"We might be one of the teams that play playoff hockey during a season," Gourde said. "Just hard, hard to play against during the season, and that hopefully leads us to playing in a playoffs and then we’ll see what happened."