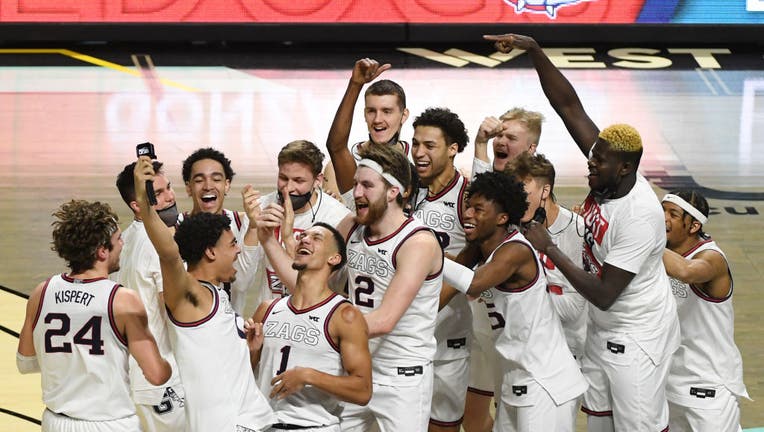 LAS VEGAS, NEVADA - MARCH 09: The Gonzaga Bulldogs celebrate on the court after their 88-78 victory over the Brigham Young Cougars to win the championship game of the West Coast Conference basketball tournament at the Orleans Arena on March 9, 2021 i

Gonzaga received the top overall seed for the NCAA Tournament, with Arizona, Kansas and defending champion Baylor joining the Zags as No. 1s.

The March Madness bracket came out Sunday for a tournament that begins with early round games Tuesday and concludes with the Final Four in New Orleans on April 2. The championship game is April 4.

This marks the return to the first "normal" tournament since 2019, with teams scattering to jam-packed arenas in eight cities for the first weekend, then to four different destinations for Sweet 16, before the fun ends in the Big Easy for the semifinals and title game.

"This was a really special year because we all realized what we missed," said Villanova coach Jay Wright, whose team, a No. 2 seed, won the Big East title in front of a packed house at Madison Square Garden.

The tournament was scratched in 2020 due to the then-erupting COVID-19 pandemic. Last year, all the teams played in front of limited crowds in a makeshift bubble in and around Indianapolis. One thing that remains the same: Last year’s finalists, Gonzaga and Baylor, are top seeds, with the Zags the favorite to win it all.

Coach Mike Krzyzewski’s last tournament has Duke playing in the West, meaning he might have to get past Gonzaga in the regional final to make his 13th Final Four.